Pedro Martinez is a Bad Guy? 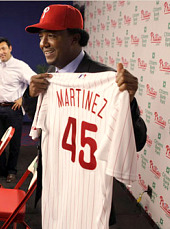 As you may have seen, Pedro Martinez signed with the Philadelphia Phillies.

Interestingly, he signed a $1M contract only after passing a physical, yet was immediately placed on the 15-day disabled list with a sore shoulder. Go figure. Well, whatever. The point is, Pedro is now a Phillie. And last I checked, the Phillies were still in the NL East (and still in first place).

What’s more interesting was the negativity thrown around by the local media just prior to the announcement. I’m speaking specifically about Tuesday afternoon, on 1050ESPN Radio, when Seth Everett called in with his thoughts on the Pedro signing. His direct quote:

“I don’t value chemistry a great deal, but Pedro Martinez is going to tear that clubhouse upside down. Someone is going to have to put him in his place really quickly.”

Don La Greca went on for several minutes explaining why he agreed with Everett — agreeing that Pedro could be a big problem in the Phillies’ clubhouse, and wondering why the Phillies would want to mess up that “winning chemistry”. Huh?

Apparently, the reason given as to why Pedro would be disruptive was this: “because let’s face it, he’s Pedro Martinez”. Um …. ok …. and that means …. ?

Very strange, no? Am I the crazy one? Because I don’t remember one — NOT ONE — report or quip from anyone in the New York media describing Pedro Martinez as anything but an absolute joy in the clubhouse, a leadership figure, and a wonderful teammate from 2005-2008. I do remember some talk of Pedro being something of a prima donna PRIOR TO his arriving in Flushing, but from the moment he donned the orange and blue, all we heard was how he was a tremendous teammate and positive force in the clubhouse. If I missed something, please direct me to evidence to the contrary.

So how in the world did Pedro go from good guy to bad guy? Hmm … isn’t it incredibly coincidental (or convenient) that news of Pedro being a clubhouse cancer and his signing with the Mets’ #1 rival came simultaneously? The conspiracy theorist in me wonders if someone in the Mets front office offered a few favors to some people in the media to spread some filth and malaise regarding Pedro, to help explain why they didn’t re-sign him. After all, there are many, many Mets fans who purchased “Martinez 45” jerseys over the past four years. And, to steal a phrase from the late Desi Arnaz (as Ricky Ricardo), Omar Minaya has “some ‘splainin’ to do” as to why Pedro went to the Phillies when his heart was still with the Mets.

If there was any confusion as to where Pedro wanted to pitch in 2009, he cleared it up at his press conference in Philadelphia:

I was hoping the Mets would make a move and they didn’t, so I decided to wait. It wasn’t my decision to not be in New York. It was someone else’s.

Look, I’ll be the first to question whether Pedro can help an MLB team right now. And, my opinion is clouded by my bias for him — I love watching him pitch and compete, and that may make me feel he’s better than he really is at this point of his career. Being as objective as possible, it’s hard to say that Martinez can be more than a 5-inning pitcher right now. Though, for a “measly” one million bucks, I find it hard to believe that he’s more of a gamble than Tim Redding was at $2.2M. Even if Redding can outperform Martinez in on the mound, I doubt highly that anyone outside of Rochester bought tickets specifically because Redding was the scheduled starting pitcher. And I haven’t seen too many “Redding 44” Mets jerseys in Citi Field (or Modell’s, for that matter).

Maybe Pedro Martinez could have helped out at the back end of the Mets rotation. Maybe not. But of all the factors going into the decision, I’m not getting the “bad clubhouse guy” thing. If the Mets are trying to smear his reputation — heck, if anyone is looking to smear it — it only makes me want to pull for Pedro all the more, even in a Phillies uniform. I might have felt differently if Omar Minaya didn’t string him along — as well as all the prospective season-ticket buyers — with news in late January suggesting that the Mets were still considering bringing him back.

Can Pedro help the Phillies? Who knows? Certainly, he should be at least as effective as Rodrigo Lopez, and we all remember what Lopez did to the Mets in his first start since the Nixon administration. To me, it’s a low-risk move by Philly, and if Pedro can win four or five games in the second half, it makes the Mets look REALLY bad. Can’t you just see this drama setting itself up? The Mets playing the second game of a doubleheader against the Phillies on Sunday, September 13th, 19 games behind the Phillies, and losing to Pedro on national TV (FOX) to mathemetically eliminate them from the NL East title? It could happen.

If you’re interested, my wife looked at the signing, compared it to the Tim Redding, Freddy Garcia, and Oliver Perez contracts, and had this to say:

“The Mets are stupid”