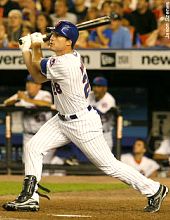 Last year, a determined and serious young man leapfrogged over AAA into the big leagues and became a fan favorite for his hustle, energy, and line-drive bat. Perhaps most importantly, Danny Murphy was “home-grown” — a ballplayer drafted by the Mets and developed in their farm system. There is something particularly endearing about a player who starts at the bottom, works his way up, and earns himself a spot with the hometown team.

And it doesn’t hurt to arrive in the midst of a hitting streak.

Think back to this time last summer, when Danny was giving it his all to learn left field “on the job”. He had his troubles, for sure — who wouldn’t? — but his tenacity was up to the task. He came to the park early to learn the nuances of fly ball catching, hitting cutoff men, and reacting to balls bouncing off the wall. We all watched young Danny transform himself from a minor league third baseman into a Major League outfielder over the course of 7 weeks. Some of his improvements were subtle, but they were expertly observed by the keen eyes of former MLBers Keith Hernandez and Ron Darling — who luckily were in the SNY booth and could pass on the information to we neophytes sitting at home. These observations were of course supported by quotes from Mets manager Jerry Manuel, members of his coaching staff, and the players themselves — and eventually picked up by respected journalists, who in turn passed on to their readers the optimism of Danny Murphy’s improving defense.

Thus the myth began, and spread like wildfire: Daniel Murphy was developing into a strong defender in the outfield — so much so, that the Mets brass was penciling him into the 2009 lineup as the starting left fielder. And why not? They had to find somewhere to put that potent bat.

Ah, but there’s the other myth that had its genesis this time last year: that Dan Murphy was a future batting champion. He reportedly had a “quick bat”, a “mature approach”, “great patience and discipline”, and “hit the ball to all fields”. We knew all this because that’s what the journalists were writing, and what Keith Hernandez told us every time “Murph” came to the plate. And who would argue with Keith? He actually won a batting title, so he’d know better than anyone.

Unfortunately, what we saw last year from Dan Murphy was a mirage. He’s a decent hitter, and he does try very hard, but the fact is, his skillset isn’t particularly overwhelming in comparison to dozens of other hitters currently in the minor leagues.

It turns out his bat speed is average at best, and eventually the league figured out that he was easily overpowered by hard fastballs inside. To his credit, Murph made the adjustment, and started looking “in” — but simultaneously became susceptible on the outside of the plate, because he was starting his swing sooner.

To be fair, there are very few batters who can cover both sides of the plate — even the elite have a vulnerability somewhere in the strike zone. The difference is, the elite compensate in one way or another, and/or can still handle their vulnerable area better than most. Murphy, however, is not elite — he’s ordinary. Not ordinary like you and me, but ordinary in terms of the best hitters on the planet. He has two forms of attack: 1) guess; and 2) force the pitcher to throw enough pitches until he makes a mistake. This is how Dan Murphy survives, and you have to give him credit for finding a way.

His tenacity and will to survive at this level are inspiring, commendable traits and make him a guy you can’t help but root for. However, he most likely doesn’t have enough skills to warrant a job as a starting first baseman in MLB — particularly not in the 21st century.

Off the top of my head, the only singles hitters who were able to forge a sustained, successful career as a starting first baseman in the last 30 years were Rod Carew, Pete Rose, and Mike Hargrove (yes, Dave Magadan was a singles-hitting first baseman, but he never once attained 500 at-bats in a season). Maybe you can throw Mark Grace and Bill Buckner in there too, though both were good for around 15 HR a year. But most of those names share a common thread — all but Hargrove were perennial threats to win the batting crown, and a near-lock to hit at least .300. Hargrove was a shade lower — around .290 most years — but made up for it with a sky-high OBP (which, ironically, was not valued in his heyday the way it is today). Further, all but Grace played when there were only 26 teams in MLB, the pitching was less diluted, and home runs were more rare. These days, an average first baseman on a contending team provides at least 18-20 HRs AND a second asset. Sid Bream would not have a starting job in the 21st century.

It’s questionable whether Murphy will ever hit more than 10-15 HRs in a season, and though he might have a shot at .300 in his best year, it’s highly doubtful he’ll threaten for a batting crown. His power will have to improve considerably to be a legitimate homerun threat, and that also is unlikely considering his age and the ban on PEDs. Though his baserunning instincts are average, his foot speed is below average and won’t get better. His fielding is below average now, and can improve — but will it be enough to offset a projected ceiling of a .275 batting average, .330 OBP, and 10 HRs ? Those are numbers more fitting of a slick-fielding second baseman, or a catcher.

So far, Murphy has proven to be an excellent pinch-hitter, and has shown an above-average ability to drive runners home. He reminds me a lot of Matt Franco in that respect, and I believe he has a place on a championship team in that capacity. People such as Franco, Danny Heep, Gates Brown, Manny Mota, and Lenny Harris made a career out of pinch-hitting, so this isn’t a knock on Murphy in any way. Rather, it is a realistic analysis of where his future lies.

That said, it’s time to start seeing Dan Murphy for what he is, rather than placing unreasonable expectations upon him. It’s clear the Mets are going to give him every chance to re-discover the magic that allowed him to hit .333 last August — and this is what worries me. Murph might go on a hot streak between now and October, and that would be enough for the Mets to pencil him in as the starting first baseman — in other words, a repeat of what they did last year, but with LF. It’s the same backward thinking that assumed Fernando Tatis would hit .297 again, when in reality, that average was artificially boosted by an abnormally hot month of July.

Indeed, Murphy might find a way to improve upon his current .250 AVG / .310 OBP to more respectable levels, and occasionally pull off a flashy play in the field. But in the end, he’s not Rod Carew, Pete Rose, or even Mark Grace. He’s Daniel Murphy: hard-nosed, tenacious, likeable player who belongs in MLB — though not as the starting first baseman on a championship team.