Are the Mets Too Old?

Were the critics correct?

The preseason pundits told us that the Mets would not repeat as NL East champions because:

For the first few weeks of the season, the 2007 Mets seemed on the road to disprove the naysayers.

They began the season with an exclamation point, sweeping the reigning World Champion Cardinals in St. Louis. Their starting pitching was clearly the teamâ€™s strength, as the four-man rotation of Tom Glavine, Orlando Hernandez, John Maine, and Oliver Perez was routinely pitching into and past the 7th inning. Moises Alou was red-hot, leading the NL in batting for a short time, and the â€œslowâ€ bat of Shawn Green was right on his heels. Jose Valentin was hitting around .270, getting clutch hits, but more importantly, flashing a gold-like glove around the keystone.

Then May came, and the wheels fell off.

All at once, it seemed, the Mets were breaking down — just as the pundits predicted. El Duque developed bursitis in his shoulder; Jose Valentin tore his ACL; Moises Alou split his lip and injured his shoulder; Mike Pelfreyâ€™s sinker was pilfered; Aaron Heilman was looking like a deer in headlights; and neither David Wright nor Carlos Delgado could buy a homer, hit, or RBI.

And all that happened BEFORE the Mets lost two in a row at home to the Florida Marlins, getting shut down by the 6.27 ERA of Scott Olsen and Ricky Nolasco, a guy who went 0-3 with a 19.72 ERA against the Mets in 2006.

In the meantime, the Braves took over first place, the barking Phillies continue to creep up in the standings, and the pundits are patting each other on the back.

Since losing the series to the Fish, the outlook has been mixed. On the one hand, David Wright finally broke out of his slump, hitting his first homerun of the year. On the other, Alou can now add a knee problem to his growing list of ailments. Additionally, Chan Ho Park looked absolutely abysmal in El Duqueâ€™s place, and despite a win, Aaron Heilman still looks lost. One thing going for the Mets is that they are starting to get the clutch hits — though Delgado still isnâ€™t stroking the ball the way he should, and 48-year-old Julio Franco is currently outperforming him at bat and in the field. And, after winning their first two games in Arizona, the Mets are back in first — though in a tenuous tie with Atlanta.

Is it time to panic? Are the Mets really too old, too fragile, and too challenged in the pitching department?

Probably not. There are still five months to turn things around, and close to 85% of the season lies ahead. The good news is, the future looks bright, and help is on the way.

For one thing, consider that the Mets started out 15-10, a half game out of first, while getting next to no production from their #4 and #5 hitters. It is silly to believe that Carlos Delgadoâ€™s batting average will remain below the Mendoza Line, and Wright looks to be on the way back to his old self. Getting those two bats back into swing of things is a wonderful thing to look forward to, and key to jumpstarting the slumping offense.

Similarly, we can look forward to pitching help arriving from the farm. For example, though Chan Ho Park appears to be a bust, the reclamation project of Jorge Sosa looks to be going very well. Pitching in the homer-happy PCL, Sosa has a 4-0 record and a 1.12 ERA — a considerable achievement, considering that his biggest bugaboo has been allowing balls to fly over the fence. His quick start undoubtedly would have earned him a promotion over Park, but the scheduling didnâ€™t work in his favor. Weâ€™ll see tonight if Sosa is the real goods or if his four games in AAA were a fluke. 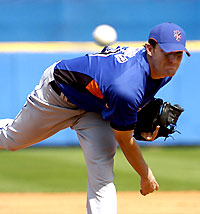 And if Sosa is not the answer, youngsters Philip Humber and Jason Vargas continue to progress, and appear to be on the brink of being helpful at the big league level. Sosaâ€™s hot start means the Mets donâ€™t have to rush either of those arms, and let them develop on their own pace. If they keep improving, one or the other — or both — could be at Shea by mid-June, if needed.

Speaking of June, thatâ€™s when Guillermo Mota should be back to help Aaron Heilman with the 8th-inning setup role. Additionally, Dave Williams could be back to provide some middle relief — or starting depth — if needed. And though no oneâ€™s counting on him for this year, Pedro Martinez continues to be slightly ahead of schedule in his comeback from rotator cuff surgery. Anything Pedro provides will be a bonus.

In the field, Damion Easley is already filling in nicely for Valentin, providing a flair for the dramatic with the bat and turning double plays. Plus, the nearly forgotten Ruben Gotay has leapfrogged over Anderson Hernandez, and could be a pleasant surprise. Meanwhile, the nagging injuries suffered by Alou offer Endy Chavez an opportunity to prove why heâ€™s the best fifth outfielder in MLB, and give the Mets a boost of speed and defense. And let us not forget Lastings Milledge is chomping at the bit in New Orleans, ready and waiting for another shot with the big club. With plenty of talent in reserve, the Mets are well-equipped to handle the myriad breakdowns that occur on all teams in a 162-game season — old and young alike.

There may be some bumps and bruises over the next month, but during that time several players will define their roles, and the 2007 Mets will start to take shape.

And if youâ€™re still worried about their race for the pennant, consider that at this time last year, Jose Lima and Jeremi Gonzalez were anchoring the back of the rotation, Jorge Julio was taking up space in the bullpen, Kaz Matsui was the starting second baseman, and Jose Valentin was batting .154. So things could be a lot worse â€¦ and yet, look at how that 2006 team turned out.