Mets to Make a Deal?

Omar has been too quiet. Something has to be up. Unless we really think the signing of Brian Lawrence has been Minaya’s biggest project in this young season.

Over at the Mets blog on SNY, Ted Berg has a list of second basemen that the Mets might consider pursuing: Jorge Cantu, Marco Scutaro, Jamey Carroll, and Mike Fontenot. Other than Cantu, a strange list, and what makes it even stranger is that Berg dismisses Cantu as “not that good” and “he can’t really hit”.

Personally, I’m not sure why the Mets would trade able-bodied players (such as Ramon Castro, as Berg suggests) for Scutaro, Carroll, or Fontenot, when they could just as easily get Jeff Keppinger back for a bag of balls or convince Fernando Vina to come out of retirement. Those proposed options are not significant upgrades over the current Damion Easley / Ruben Gotay combo. 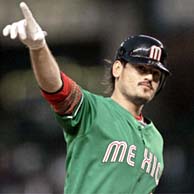 Cantu, however, is intriguing. After hitting 28 homers and driving in 117 in 2005, his production fell off in 2006 — though not so much to bury him. The 14 HRs, 62 RBI, and .249 average are not that far from Valentin’s output last year. His glove is not the greatest, but neither was Valentin’s this time last year. Berg points to weak OBPs as indicators that Cantu stinks, but I don’t buy it. Take a look at Jeff Kent’s OBP in his early years and you’ll see strikingly similar numbers (Kent, in fact, was a very similar player at the same age). Young batters — particularly sluggers — tend to have a lower OBP because they are free swingers. As they mature, and continue to hit for power, they learn to lay off pitches and take their walks. At only 25 years old, and with his value at an all-time low, now is the time to roll the dice for a talent such as Jorge Cantu. If nothing else, his cheesy mustache compares favorably to Valentin’s.

Other than Cantu, the only other possibilities would be Ronny Belliard, Jose Castillo, or maybe Mark Grudzielanek. Belliard’s time as a starter with the Nationals is over now that Cristian Guzman has returned. Belliard has been pining to return to his New York City roots, and should come cheap. However, the Mets had little to no interest in him when he was a desperate free agent, so it’s hard to see them trading for him. Grudzielanek might be a good fit, but he probably isn’t available. The emergence of Esteban German suggests that the Royals could make Grudzielanek available, but that’s just a guess. He’s the only established veteran on the team other than the oft-injured Mike Sweeney, so they may want to keep him around to set an example for the youngsters. 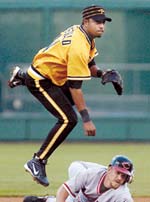 On the other hand, Jose Castillo could be had, as he’s stuck behind Freddie Sanchez at second and Jose Bautista at third. His average is currently hovering around the Mendoza line, and the Pirates have had it with his work ethic. Like Cantu, he’s been a slugger in the past, and is only 26 — far from washed up. Maybe a change of scenery would do him good — it certainly worked out well for Oliver Perez.

In the end, I’m not so sure Omar Minaya is shopping for a second sacker. With Shawn Green picking up the slack at the bottom of the order, the Mets may be OK giving Ruben Gotay a chance to reclaim his once-promising career (see my full take on Gotay tomorrow afternoon at FlushingUniversity). If that’s the case, Minaya is more likely working the phones hard for some legitimate bullpen help and possibly a power-hitting reserve outfielder to help Endy Chavez spell Moises Alou — the role that Ben Johnson might be filling if not for a shoulder injury.

Back Mets Game 31: Loss to Giants
Next Q&A: Brian Lawrence