One More Time for Edgardo Alfonzo? 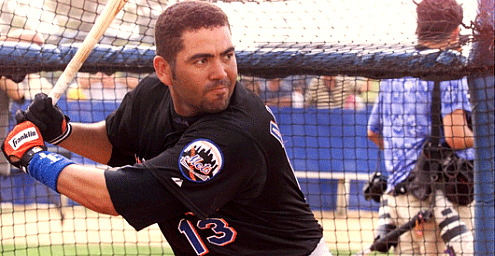 Edgardo Alfonzo is eager to return to MLB, and wants to end his career as a New York Met, according to Kevin Kernan of the New York Post.

Fonzie hasn’t played in MLB since 2006, spending 2007-2008 in Indy ball and last season in Japan — leading the Yomiuri Giants to the championship while playing 1B, 2B, 3B and DH. He’s now in Venezuela prepared to play winter ball, hoping for one last shot — preferably with the Mets.

“My dream is to retire with the Mets colors,” Alfonzo said. “That’s my dream. That’s what I’m praying for, maybe it will happen, maybe not, but dreams sometimes come true, you know.”

“I have a lot of hope for my future, I want to show people I can play in winter ball,” Alfonzo said. “I love the Mets and I love the Mets fans. I would like that dream to come true.”

Yes, the Mets are looking to get younger and more athletic. But if he continues to play well and proves to be healthy, I’d love to see them give Fonzie one more shot. What do they have to lose by offering him a ST invite?

Look at it this way: Omar Minaya has spoken to Scott Boras about re-signing Alex Cora — presumably to another $2M deal. Would you rather see Cora get a guaranteed MLB contract or give Alfonzo a non-guaranteed, incentive-laden, minor league contract and a chance to be the infield utilityman?