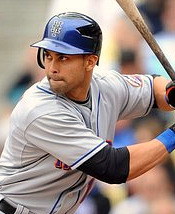 Flashy leadoff man or flash in the pan?

At times, Angel Pagan displayed a marvelous skill set, lashing line drives to all fields, running the bases like a madman, and covering outfield ground with the ease and finesse of a veteran Gold Glover. At other times, he looked overmatched at the plate, confused in the field, and a bonehead on the bases.

No one questions Pagan’s raw talent — he has good speed, a strong arm, and a fast bat. What comes into question is everything above Angel’s neck. At age 28, and after 10 years and 900 games as a pro, one has to wonder if he’ll ever “figure it out”.

At his best, he’s a poor man’s Carlos Beltran: a switch-hitting centerfielder with an impressive arm, power at the plate, and a basestealing threat. But his lapses in concentration — or, inability to grasp fundamentals — often negate his positives. To say he’s a streaky hitter is an understatement, but when he’s hot, he’s an ideal leadoff man, with line-drive gap power that leads to exciting extra-base hits — as evidenced by his finishing fourth in the NL in triples despite playing only 88 games (OK, Citi Field helped that total, but still, pretty impressive). Unfortunately, when Angel’s not hitting, the glaring holes in his game are magnified; most specifically, his poor baserunning instincts and often awkward defensive play.

One thing that people must remember is that Angel Pagan was never considered a top-flight prospect, never hit more than .287 over a full season in the minors, never reached double figures in homeruns in any year, and collected 500+ at-bats only twice in ten professional seasons. Early in his pro career, his main tool was his speed — he was a burner on the basepaths, and used his legs to make up for errors in judgment both between the bases and in the outfield. Now that he’s older, banged up, and lost a step, his poor judgment is exposed — especially at the big league level, where everything moves just a bit faster. His fielding, in fact, is not unlike that of Shawn Green in the twilight of his career, when he, too, lost a step (or three). Like Green in his youth, Pagan used to be able to outrun his mistakes; but now, those mistakes result in flies that fall safely and runners who take extra bases.

Given the chance to play everyday for the first time in his MLB career, Angel Pagan made the most of it, hitting over .300 with an .837 OPS. He was a man on a mission in the final two months of the season, and put up Jose Reyes-like numbers from the leadoff spot. But don’t take it from me, check the stats — Pagan hit .342 when coming to bat as the first batter of the game, and hit .316 in the 77 games he was penciled in as the leadoff hitter in the starting lineup.

What the Mets have to figure out though, is, was it real? Pagan did the bulk of his damage in the final 50 games of the season — hitting the best he had since a 62-game stint with the Brooklyn Cyclones as a 19-year-old in 2001. Were those fantastic fifty games the result of a late bloomer finally given a fair opportunity to prove his worth, or was it a Phil Plantier-like, once-in-a-lifetime streak? Will he get better as he gets to know opposing pitchers, or will he regress once opponents know how to pitch to him?

It’s a tough question, but Angel has one thing on his side — affordability. His hot hitting down the stretch combined with a measly $600K salary makes him a no-brainer in comparison to similarly tooled fourth outfielders. If he can keep his bat going, his offensive game is ideal for Citi Field, and will be more than a capable backup to Carlos Beltran — who should be given more rest considering his creaky knees. With a little luck, combined with fundamental improvement, he could make a case as a platoon player in left field — though he may need to rely on more injuries to get another shot at a regular job.

Back Should They Pay Or Just Say No?
Next Giving Thanks