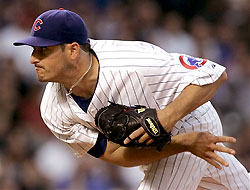 The Chicago Cubs were baseball’s biggest player in the offseason, spending an enormous amount of money to retain Aramis Ramirez and fetch the services of manager Lou Piniella, outfielders Alfonso Soriano and Cliff Floyd, pitchers Jason Marquis and Ted Lilly, and infielder Mark DeRosa — among others. The “new look” Cubs are a much different team than the one that lost 96 games last year, and much better than their 17-18 record would indicate. Their deep starting rotation has been surprisingly solid, and should get more offensive support as the season goes on. With all the changes, it was expected that the Cubs would start off a bit rough, but when this team gells, the NL-Central leading Brewers will have a formidable opponent on their tail.

To give we Mets fans more of the “inside story” of these rising Chicago Cubs, Al Yellon of Bleed Cubbie Bluewas kind enough to answer a few questions.

How has Lou Piniella made an impact on the team thus far — in regard to attitude and performance? Is it clear that “there’s a new sheriff in town”? How are Cubs fans reacting to any changes he’s implemented?

I think Piniella is THE biggest reason for the change in attitude in this franchise this season. There have been some immensely frustrating losses via bullpen meltdowns, bad baserunning, etc.

And unlike Dusty Baker, who would have just said, “Geez, we had a tough day, dude”, Piniella immediately does something about it, whether trying different relief combinations, or lineup changes, or, well, just *something*.

Lou wasn’t my first choice for manager — Joe Girardi was. But so far, I’ve liked what I’ve seen from Sweet Lou. He’s not anything like his “throw a base as far as you can” reputation. He just wants to win. That’s refreshing.

What is Jason Marquis doing differently this year? A mechanicalchange? Mental change? Is he pitching over his head?

It’s both mechanical — Larry Rothschild worked with him intensively during the off-season — AND mental. It appears that the vaunted team of LaRussa and Duncan just didn’t like Marquis, and the feeling was mutual. Last year LaRussa left Marquis in games twice to take ten-run-plus poundings. Take those away and his season ERA in 2006 drops by a full run.

Marquis has attributed his success to good mechanics and throwing the same way every pitch. I’d agree. He’s getting his sinker to work and getting ground-ball outs, which is what he needs to continue to succeed. Will he have a 1.70 ERA all year? Of course not, but I’d settle for something in the low three’s. If he can do that, he can easily win 15 games.

We’re catching some buzz this way that Carlos Zambrano and Piniella are not getting along. Zambrano also seemed miffed about the contract extension that never happened. And his ERA is soaring toward six. What’s the real story, and will he be a Cub next year?

I haven’t heard anything about a Piniella/Zambrano rift. In fact, Saturday, Z threw a side session with Lou watching, and both pronounced themselves pleased with the result. Both management and we the fans have noticed a problem with Z’s arm angle; he seems to be telegraphing his pitches, at least early in the game. If that’s addressed, he should be just fine.

Will he be a Cub next year? Who knows, with the uncertainty of who’s going to be the club owner.

In a related question, how are fans reacting to the impending sale of the Cubs?

There was a big flurry of activity and discussion at first — but not much lately. There’s no “impending sale” at this time. What I mean by this is that the Tribune Co. sale is not finalized, and until that happens, Sam Zell can’t put the Cubs on the market. It is entirely possible, given that and the glacial pace at which MLB approves such sales (and FWIW, there is NO way they will EVER approve Mark Cuban as a MLB owner), that the current management team could still be in place on Opening Day 2008.

Rich Hill is taking some big strides so far … is this his “breakout” year?

Hill actually had his “breakout” year the second half of 2006, when he went 6-3 with an ERA in the 2’s, for a terrible team. He’s continued that performance so far this season; the difference appears to have been a change in attitude when he was sent down in May 2006. He was a totally different pitcher when he returned. He’s 27 — older than Mark Prior — but better late than never.

Here in NY we had a good look at the Brewers over the weekend. Strong pitching from start to finish, aggressive young hitters, fundamentally sound. What do the Cubs need to do to get past them?

You hit the nail on the head in your description of the Brewers. Consistent pitching and good fundamental play will go a long way toward making the NL Central a race again. Milwaukee’s good — but not THIS good. They will come back to the pack.

If the Cubs’ starting pitching can continue to be as good as it has so far, on a consistent basis, they will win a lot of games, because this lineup WILL hit.

Cliff Floyd was a fan favorite at Shea. How is he fitting in with the Wrigley fans so far?

Floyd’s not much more than a blip, to be honest with you. He doesn’t play enough — starting maybe three times a week — to have any impact with the fans. So far he hasn’t done anything really awful, but neither has he done anything spectacular. I saw him play in spring training games and he could barely run, letting many balls drop in front of him in the outfield. He seems better now; I’ve been surprised at how well he runs the bases.

Honestly, Jim Hendry should never have signed him — all his presence does is create a logjam in the outfield, where there is not enough playing time for everyone. Hendry recruited Floyd when he was coaching at Creighton, but Floyd opted to sign with the Expos instead. Hendry’s been after him for nearly 18 years. Unfortunately, he got him for the Cubs a couple of years too late — he’d have looked real good in left field in 2005.

Thanks again to Al — be sure to check out BleedCubbieBlue.com for more insights on the Chicago Cubs.

Back Mets Game 36: Win over Brewers
Next Mets Second Base Question