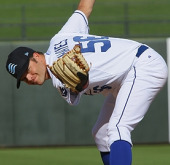 The winter meetings conclude with what’s known as the “Rule 5 Draft”, during which players not on 40-man rosters can be plucked from other organizations. The draft order goes according to the won-loss records of the previous year, beginning with the worst and ending with the best. In a stroke mixed with irony and stupidity, the World Champion Yankees own the #1 pick in the Rule 5 draft — the Nationals traded the pick to the Yanks for Brian Bruney. Six picks later, the Mets get to pick (one of the benefits of their poor 2009 season), and may have the chance at an MLB-ready player. Here are a few possibilities, in no particular order.

Chris “Disco” Hayes (Royals)
He’s an overachiever, a way-way-under submariner, he has his own sabermetric-inspired blog, and his nickname is “Disco” — need I go any further? Hayes walked only 13 and allowed just 3 HR in 86 IP split between AA and AAA last season. He’d be an ideal guy to pick, break camp with, then put on waivers so he can succeed elsewhere. Oh wait, that was Darren O’Day.

Neil Wagner (Indians)
Wagner is a 26-year-old righthanded reliever whose fastball sits at 93-95 MPH, touches 98, and is complemented by a so-so slider and only an average change-up. He struck out 69 in 61 IP for AA Akron, but struggled a bit with his control, walking 32. He sounds a lot like Bobby Parnell, doesn’t he? In fact he might be a little ahead of Parnell right now, and if so, he’s worth taking.

Chuck Lofgren (Indians)
Strange that the rebuilding Indians would have two near-ready pitchers left off the 40-man roster, but true. Lofgren is a 23-year-old, lefthander who did well in AA but struggled after a promotion to AAA. However, he was used exclusively as a starter and probably projects as a LOOGY– he held lefthanded AAA hitters to a .210 AVG. A former #2 prospect in the Injuns’ organization, his fastball is underwhelming (sits at 90 MPH, touches 93) but has a deceptive delivery and supports the heater with a slow curve, change-up, and slider.

Yohan Pino (Indians)
Yet another fine young arm in the Cleveland system — seems they have more unprotected prospects than the Mets have in their entire farm system. Pino was acquired as the PTBNL in the trade that sent Carl Pavano to Minnesota, and he split 2009 with three different minor league clubs as both a starter and reliever. The Venezuelan hurler is not overpowering — his fastball tops out at 88-89 MPH — but he’s posted excellent strikeout rates thanks to plus offspeed stuff. Like many pitchers developed by the Twins, he throws lots of strikes — he walked only 29 in 127 IP last season. If chosen by the Mets, he might be their best candidate for the #5 spot in the starting rotation.

Zach Kroenke (Yankees)
The fact his name sounds similar to Zack Greinke should be enough to interest in the Mets, and in fact he is a lefthanded pitcher. Unlike the KC Cy Young winner, Kroenke is a reliever — and don’t the Mets need another LOOGY to pair with Pedro Feliciano? Pitching for the Scranton-Wilkes Barre, the 25-year-old posted a 7-1 record, 4 saves, 1.99 ERA, 1.16 WHIP, and struck out 55 in 72 innings — covering 36 appearances, so he’s accustomed to multiple innings. Mike Axisa of River Avenue Blues astutely points out that Kroenke “is almost a lock to get picked because he’s a living, breathing lefthander that has had success in Triple-A.” FYI, Kroenke was a Rule 5 pick of the Marlins last year, but returned to the Yankees halfway through spring training.

Kevin Whelan (Yankees)
Another excess arm in the Yankees organization, but this one uses his right hand. Whelan spots a lively, hard sinking fastball in the 92-94 MPH range that occasionally gets to 96 and he mixes in a plus splitfinger that “buries hitters” according to John Manuel of Baseball America. The soon-to-be-26 year-old posted a combined 2.67 ERA, 1.20 WHIP between AA and AAA, striking out 85 in 67 IP and allowing only one HR. His main issue is control — he walked 45 last season. But he supposedly has “classic closer stuff” and is described as a tough competitor.

Chad Tracy (Rangers)
Not to be confused with the free agent and former Diamondback, this Chad Tracy is the son of Rockies manager Jim Tracy and a slugger in the Rangers’ organization. Tracy was a standout catcher at Pepperdine University before being drafted in the third round of the 2006 draft. He recently moved out from behind the plate to play both 1B and LF, and hits from the right side. Last year he had 26 HR, 32 doubles, 107 RBI, .279 AVG., and .821 OPS for AA Frisco in the Texas League. Hmm … a young, RH slugging, 1B/LF/C — can the Mets use one of those?

Aneury Rodriguez (Rays)
A long and lanky righthander, Rodriguez was the player traded for Jason Hammel and is only 22 years old. He’s a starter now, mixing a 92-94 MPH fastball with an average “slurve” that’s not unlike Mike Pelfrey’s in terms of movement and quality. Many scouts believe his velocity and effectiveness will increase with a move to the bullpen. The downside is a proclivity to give up the long ball, but that would be diminished in the cavernous confines of Citi Field.

Arquimedes Caminero (Marlins)
This 6’4″, 22-year-old flamethrower is rumored to be coveted by the Yankees, but I’m not sure why. He throws in the mid-90s and gets a lot of swings and misses from overmatched A-ball hitters, but he’s also very hittable, walks almost 6 batters per 9 innings, and pitched all of 2 innings above low-A ball last year. He sounds to me like a young Jorge Julio, only more raw, if that’s possible.

This is by no means a complete list of the top players available, so if you have any ideas of your own please post them in the comments.

Back Millwood Traded and Other News
Next Mets Draft Carlos Monasterios