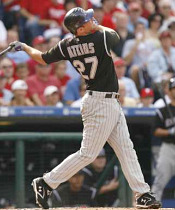 His altered approach and downward spiral might also be explained by lack of protection in the lineup. In 2006 he spent most of the time batting either third or fourth, immediately ahead of Matt Holliday or Todd Helton. In 2007 he was most often in the fifth spot, behind Helton and ahead of Brad Hawpe. In 2008 he also most often hit fifth, ahead of Hawpe or Ian Stewart. Last year he was all over the lineup, when he was in it, and actually spent most of his time in the cleanup spot — usually with Hawpe batting fifth.

For your information, he has played over 100 MLB games at first base, and another 180+ at the position in the minors. He has also appeared in the outfield but I don’t know if it’s a position he can handle.

To me, Atkins’ current situation is reminiscent to that of Jorge Cantu a few years back. Some of you may remember my obsession with Cantu when his career was similarly spiraling downward. Atkins turns 30 years old today (what a nice b-day present — losing your job!), and is still young enough to turn things around over the short term. It is reclamation projects like this that the Mets should be taking advantage of, rather than throwing millions at proven mediocrity such as Alex Cora, Elmer Dessens, Henry Blanco, etc.

Back Bostick, Wilson Sign with Royals
Next Alex Cora Injures Back