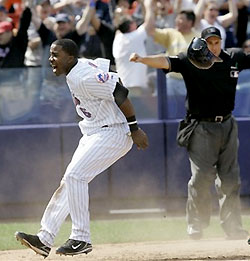 After falling behind 5-1, with the B-squad on the field and a young lefty giving up gopher balls, this game looked like a giveaway in the late innings. Manager Willie Randolph was committed to keeping his regulars on the bench, to enjoy a well-deserved day off. If the second-stringers couldn’t muster up the gumption for a win, so be it — tomorrow is another day.

Then, Ryan Dempster entered the story.

The Mets faithful might have seen it coming, but the Cubs fans were blindsided. Dempster came into the game with a 2.37 ERA, dominating 0.84 WHIP and .159 BAA, and only one blown save in nine chances. He’d been part of the reason for the Cubs’ early success and second place standing. So when manager Lou Piniella put him in to close out the game, it appeared to be all but in the bag.

The inning started innocently enough — a David Newhan single followed by a Ramon Castro fly out. But Castro’s liner was the last out the Mets would make for the rest of the day, as the next seven hitters reached base, en route to a 5-run rally that won the game. If not for the fact the Mets were the home team, they might still be up.

After Castro’s out, Carlos Gomez singled to right-center, chasing Newhan to third. Carlos Beltran was sent up to pinch-hit, and after he took two balls from Dempster, Piniella ran out to the mound in a huff — strange panic move, since the Mets had yet to score a run in the inning. Eventually, Beltran walked to load the bases, as did Endy Chavez to bring in a run. Then Ruben Gotay came up and hit a single to drive in another run. With Shawn Green coming up, Piniella had seen enough and called for lefthander Scott Eyre, against whom Green was 0-for-22 in his career. Apparently, Piniella didn’t realize that Randolph had most of his starting lineup waiting on the bench, and Willie countered with David Wright, who deposited the first offering by Eyre into centerfield for a one-run single. With Mets down 5-4 and the bases still loaded, Carlos Delgado dribbled the second pitch he saw into rightfield to score Chavez and Gotay to win the game.

Ambiorix Burgos, who pitched two stellar innings of relief — no hits, no walks, 2 Ks, 14 pitches, 11 for strikes — earned the win.

Jason Vargas was pitching a great game until the sixth inning, when he gave up two two-run homers. It was the third time through the lineup, and it was indeed a charm for the Cubs. Vargas finished the inning and pitched a hitless seventh, so overall it wasn’t that bad of a start: 7 innings, 6 hits, no walks, on 90 pitches. While the two dingers were damaging, you have to admire the kid’s aggressiveness and lack of fear. He showed good composure and challenged hitters, going right after everyone, including Alfonso Soriano and Aramis Ramirez.

The Mets “B” lineup featured Julio Franco playing 3B (and batting fifth), David Newhan batting sixth and playing 2B, and Ruben Gotay batting second and playing shortstop, among other anomalies. Newhan had a 2-for-3 day with a walk and a stolen base, and Gotay was arguably the hero of the game. Ruben went 2-for-4 — including the clutch single in the ninth — with 2 RBI and he scored the winning run.

The Mets play the “other” team in New York, the crosstown Yankees. Game time is 7:10 PM. It will be a battle of the lefties, as Oliver Perez faces Andy Pettitte.

Back NeverLastings: Milledge on the Move?
Next Grand Opening: Mets Stuff Store