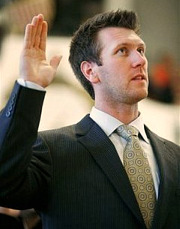 Enough is enough. If I hear, read, or see one more complaint about Jason Bay’s defense, I’m going to scream.

Since the day after the World Series ended, Jason Bay’s defense has been on trial. His deficiencies in the field have been brightly exposed by every negative stat, scouting report, and fan comment that could be unearthed. According to seemingly hundreds of sources, the Mets would do better to place a stone monument in left field rather than Jason Bay.

We get it, OK? Jason Bay’s “thing” is not defense. Now let’s move on to realistic considerations.

Bay’s position is LEFT FIELD. Since the day Alexander Cartwright laid down the first rules of the game — and before Bowie Kuhn desecrated it with his designated pinch hitter “experiment” — left field was where you put your worst fielder, usually as a means of getting a good hitter into the lineup. It matters not whether you’re playing in Fenway Park, Dotterweich Field, or the Roman Colosseum — if you need to squeeze another big bat in the lineup, but the guy isn’t so “handy”, you stick him in left field and hope for the best. You live with less-than-stellar defense in the far left corner, because his offense will presumably make up for it. Left field has historically been the “safest” place to put the most challenged fielders — the domain of Greg Luzinski, Manny Ramirez, Jim Rice, and similarly talented hitters who were somewhat challenged while wearing a fielding glove. Some may point out that first base is an equally good place to “hide” a hitter, but remember that a first baseman will likely touch the ball more than anyone else other than the catcher — so that logic is somewhat flawed.

Yes, it would be nice to have a strong fielder in left, particularly in cavernous Citi Field. But if believe that left field defense is so vital to a team’s won-loss record, I will point you to the Mets’ projected left fielder at this time last year: a platoon of Fernando Tatis and Daniel Murphy. Even at their best, Tatis/Murphy would not come close to matching Bay’s offensive production, and they’d have lost as many games as — if not more than — Bay. So just with that the left field spot will be an upgrade on Opening Day 2010 compared to Opening Day 2009.

Then there’s the fact that Bay isn’t a complete disaster in the field. Yes, there are several high-level sabermetric numbers that display Bay’s defense in a negative light — particularly UZR. The always reliable and entertaining stathead Sam Page pointed out that UZR is not a flawless stat, and believes that Bay’s defense may be a bit better than other SABRheards would lead you to believe.

Personally, I’m torn on the advanced fielding stats. Certainly they have value, but even the most ardent of their proponents admit that massive amounts of data are required for reliability in the judgment and projection of a player. In other words, a stat like UZR based on one year of a player’s career may not tell the whole story — and can be negatively affected if a player has, say, played on a bad knee for example. Wild swings in UZR from year to year are not uncommon — for example, Gold Glove centerfielder Torii Hunter has had UZR ratings ranging from -13 to +13 in his career. Does that mean he’s simply an “average” fielder?

Bay has never been a statistical standout in terms of defense, though there have been years where he was right around the average. The eyes tell a similar story — he doesn’t “look” like a fantastic fielder, but he’s not necessarily godawful, either. His range is limited and his arm is average, but he takes decent routes to the ball and doesn’t make many errors. He won’t make ESPN web gems very often but he also won’t make the highlight reel for a ball landing on his head. He will, however, hit the cutoff man, throw to the right base, stay out of Carlos Beltran’s way, and catch what he gets to. What more do you want from a power-hitting left fielder?

But if you’re still concerned, you may want to take a look at the left fielders of the NL teams that made the postseason in 2009:

Not a Gold Glover among them, eh? Smith is probably the best of the bunch, but was it his defense that had the most impact on the Rockies’ success? Or was it his .889 OPS?

Pardon the pun, but, um … the defense rests.

Back Mets Do Not Sign Aroldis Chapman
Next Backstop Sleeper Acquisition?