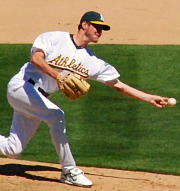 When I heard the Mets picked up a lefthanded pitcher named Marshall for the bullpen, I was kind of hoping his first name was Sean.

Instead, it is Jay.

Jay Marshall was claimed off waivers from the Oakland Athletics and added to the 40-man roster (which now comprises 39 players). Whether he’ll be the “second LOOGY” to Pedro Feliciano remains to be seen.

His horrible MLB numbers don’t necessarily mean he’ll stink it up with the Mets. Consider that Feliciano was underwhelming in the bigs at a similar age.

Marshall throws “laredo style” as Keith Hernandez might describe — somewhere between sidearm and submarine, similar to Sean Green’s arm angle (except from the opposite side). His tall and gangly frame (6’5″, 200 lbs.) combined with his unusual and deceptive delivery could wreak havoc on NL hitters for at least a few months (see: the first half of Joe Smith’s rookie season). Considering that he’ll be a “one-out guy”, he could leverage the lack of exposure factor well into the summer. Regardless, he’ll need to throw strikes and get batters to hit the ball on the ground — something he’s had trouble accomplishing against big-league hitters. In the past he has relied too much on an often flat, sideways-moving slider in attempting to get swings and misses rather than pounding the bottom of the strike zone with his sinker.

Does the pickup of Marshall mean the Mets won’t sign someone with proven MLB experience, such as Joe Beimel? It shouldn’t, but you never know what the Mets’ brass is thinking.

Back Backstop Sleeper Acquisition?
Next Comebacks