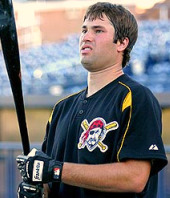 While it’s true the Mets are still in the market for a 2010 starting catcher — and all signs are pointing to the venerable Bengie Molina — they should also be concerned about who might be the backstop in Flushing through the next decade.

Yes, Josh Thole is the guy everyone has targeted to be the Mets’ catcher of the future, but Thole has some gaping holes in his game and incomplete skills development. In other words, as much as I love the kid, there’s still much projection and a lot of hoping and wishing contributing to the excitement surrounding him. It would behoove the Mets to look into some competition / plan B possibilities.

Top prospect Pedro Alvarez is projected to play third base for Class AAA Indianapolis early next season, which would leave another first-round pick, Neil Walker, without a position. Walker has a background at catcher and is athletic enough to try the outfield or second base, but management has yet to approach him about any kind of switch. A trade seems highly likely, but management sounds reluctant to trade Walker until he has an offensive breakout.

Walker is an excellent athlete (recruited by top football programs as a wide receiver) and was the #12 overall draft pick in the 2004 draft. He is a switch-hitter who was originally drafted as a catcher, but was shifted to third base in 2007 after his hot hitting allowed him to jump up to AA as a 20-year-old. Like most backward-thinking organizations, the Pirates felt the rigors of catching would somehow impede his offense and/or slow his path to the big leagues.

However, his bat hasn’t quite advanced enough to fulfill the expectations as a corner infielder, and the Pirates now have uber-prospect Pedro Alvarez at the hot corner. The Bucs either need to shift Walker again or move him to another organization.

Only 24 years old and still the owner of a strong arm, good feet, and overall athleticism, there’s still the possibility — in my mind — to move him back behind the plate. He was already ahead of where Thole is now when he was moved to 3B, and his current offensive production would be above average for a catcher (and at one point, many believed he’d be a 30-HR guy). The Pirates won’t consider that idea because their current #3 prospect in the organization is a catcher: 2009 first-round pick and Boston College standout Tony Sanchez.

I’m not sure what it would take to pry Walker away from Pittsburgh, but he would seem to be available and his value is lower now than it has ever been. Considering that Josh Thole is the only glint of hope shining behind the plate in the farm system, it wouldn’t hurt for them to at least inquire on Walker with the idea of moving him back to catcher. That’s not to say Thole will fail but rather that there’s no guarantee he’ll succeed, and it makes sense to build depth at the position if possible. In fact, if Walker were acquired and returned to catching, he could theoretically begin at A or AA while he’s getting re-accustomed to being a backstop — so no worries about Thole’s development being impeded at AAA.