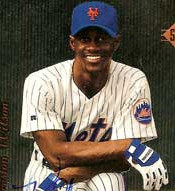 It’s recently been reported that both Preston Wilson and Jim Edmonds are looking to make comebacks.

Both players were best known as centerfielders, and the Mets — whether they realize it or not — are desperate for outfield depth, particularly in centerfield.

Though, I doubt highly that Wilson is capable of handling center, considering the knee problems that plagued his final years and pushed him to the corners. Edmonds, though, might be able to play a decent center even at age 40 — it wasn’t his legs that kept him out of MLB in 2009. I wouldn’t expect him to approach his Gold Glove status, but I would expect him to be as good or better than anyone the Mets have not named Carlos Beltran.

I know, I know — the last thing the Mets need right now are more over-the-hill players, particularly ones who have a history of being fragile. But if you can suggest better free agent alternatives, I’m all ears. Comment below.

Back Octavio Dotel Signs with Pirates
Next Gary Matthews Jr. Returning to Flushing?