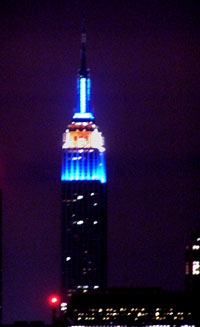 Manhattan will bask beneath the glow of Mets blue and orange for at least one night.

In the feature pitching matchup of the series, both starters struggled ever so slightly in the initial inning. One yielded a run as a result, the other managed to strand a runner at third. At the end of the game, that first frame was all the difference.

Oliver Perez may have his meltdowns, but he has a penchant for rising to the occasion in big games. Though interleague play may have lost its luster, Friday night with the Yankees at Shea was a different ballgame than, say, Mets-Marlins. The stadium was packed, the fans were loud, the media present en masse, and the atmosphere abuzz with an edge of electricity.

And Ollie was awesome.

Perez went one out short of eight full innings, allowing just two runs — courtesy of a two-run homer by Hideki Matsui — five hits and two walks, while striking out five. He was “on”, he was focused, and he was cool as a cucumber. His stuff was short of dominating, but good enough to win. Other than the Matsui homer, the Yankees never threatened after the first inning — in fact, other than the first, the Yanks did not have more than one runner on base in any inning.

However, Andy Pettitte matched Perez inning for inning, and was much more efficient. Pettitte threw just 87 pitches in his seven strong innings of work, allowing five hits and one walk. However, he made one big mistake: a gopher ball to “Legendary Endy” Chavez in the bottom of the fifth, which followed Paul LoDuca’s leadoff double. Those two runs, added to one scratched out in the bottom of the first on a Carlos Delgado sacrifce fly, were the difference in the ballgame.

Perez received a standing ovation when he left the game with two outs in the eighth. Joe Smith — and not Aaron Heilman — came on to strike out Derek Jeter looking on a 3-2 pitch.

Billy Wagner’s ninth was a little more exciting than we would have liked, but through no fault of his own. The potential game-ending grounder was mishandled by Damion Easley and his throw to first pulled Delgado off the bag — though the play was ruled a hit. Wagner went to a full count against pinch-hitter Jason Giambi, who fouled off several pitches before swinging over a nasty slider.

Endy’s legend grows a little more each week. He may be the most beloved Met of all time before it’s all over, if he keeps pumping out these crowd-pleasing dramatics. In addition to the deciding homer, Endy also threw out Johnny Damon trying to stretch a single into a double in the first. Had Damon made it, the Yankees might have scored at least one more run, since Perez had some trouble with his control at the beginning of the game.

Paul LoDuca was the only Met with multiple hits, going 2-for-3 with two doubles. The Yankees were playing him toward rightfield, but Paulie was zoning middle-in and drove two balls down the leftfield line.

Why was Damion Easley in the field in the ninth inning? Ruben Gotay may not be Anderson Hernandez, but he’s significantly better defensively than Easley. Willie takes the “my guys” thing a little too far sometimes … you’d think he would have seen the 1986 World Series Game Six at least once (SNY plays it every two days, after all) — remember, that game that Boston manager John McNamara left in one of “his guys” at first base?

Interesting to see Smith come in to finish the 8th instead of Heilman, since both were well-rested. Jeter’s 1-for-4 lifetime against Heilman, so it probably wasn’t a statistical matchup thing. The conspiracy theorist in me thinks Heilman is hurt. The logical part of me says Willie liked the idea of putting Smith out there because no one on the Yankees had seen him before, and he is nearly unhittable to the uninitiated.

These are not the Yankees of years past. They were flat, boring, and lifeless. It seemed like they didn’t even want to be on the field.

Back Preview: Mets vs. Yankees
Next Mets Game 42: Win over Yankees