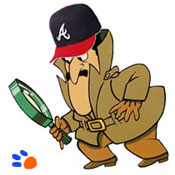 With two and a half games separating the Mets and Braves at the beginning of another three-game series between the two teams, we’re lucky enough to get some inside information from Kristi Dosh, one of the excellent writers over at Chop-N-Change, a popular Braves blog.

Read on for the top 9 questions regarding the series (why not 10? because we’re different!) …

1. Tough series in Fenway … no doubt the Braves are glad to be going home. How much of the two losses to Boston were due to the mental mind games of playing in Fenway Park? Were there any other significant factors?

Anthony Lerew has now admitted to having elbow pain recently, it came as no surprise that he got beat up on early and had such a short outing on Saturday. Iâ€™m sure most Braves fans would agree with me that weâ€™re sick of young pitchers who hide their arm pain. Iâ€™m all for sending Lerew back down to give him time to heal and to mature.

Hudson losing, however, was a surprise â€“ at least based on his performances so far this season. Red Sox fans called it though, citing his lifetime 1-4 record and 7.92 ERA at Fenway. Either his pitching isnâ€™t suited to Fenway or he has some serious mental issues about playing a few hundred feet from the Green Monster!

4. This is shaping up to be an exciting race between the Braves and Mets — and the Phillies are starting to come on as well. What will the Braves have to do — other than exile Mark Redman — in order to take the NL East pennant?

Along with exiling Mark Redman, the Braves need to clone Smoltz and Hudson to fill two more spots in the starting rotation. Kidding, of course, but in all seriousness, the Braves have got to have another quality starter in order to make it to the playoffs. My prediction is that weâ€™ll part ways with Jarrod Saltalamacchia in order to score a solid starter.

5. What is going on at first base? Is Thorman/Wilson really the answer?

Wilson is no longer the answer and was released last week. Thorman has been doing fantastic defensively and his offense has really come on as well. I think you might see a few guest appearances at first base by Jarrod Saltalamacchia as the season progresses, but I imagine heâ€™ll end up as trade bait and not as part of a permanent platoon at first base.

6. Bob Wickman, Rafael Soriano, Mike Gonzalez: who do YOU like as the closer?

Iâ€™m very torn about this one. At the beginning of the season, I would have said Wickman without pause. However, Iâ€™m a big fan of Soriano now. I especially like the one-two punch Gonzalez and Soriano provide when they cover the eighth and ninth. After this season, I imagine Wickman will retire and weâ€™ll rely on the Gonzalez-Soriano pair to finish games. For now, Iâ€™m thrilled to have three guys who can close after the year we had last year with no closer.

7. Let’s play GM. What do you want for Jarrod Saltalamacchia? (how about Lastings Milledge?)

Now this is my kind of question! Those whoâ€™ve followed me for any amount of time will know that my dream is to be the first female GM in Major League Baseball. Until then, hereâ€™s my amateur attempt at my *dream* deal…

I would trade C Jarrod Saltalamacchia and minor league LHP Matt Harrison to San Diego for Jake Peavy. Heâ€™s currently signed through the 2008 season with an option for 2009. Heâ€™s due $6 million in 2008 (not counting escalators) and the option for 2009 is at $8 million.

San Diego could use Saltalamacchia both offensively and defensively. Their current platoon, Bard and Bowen, have done little offensively. Bard is only batting .239 and Bowen is doing even worse at .200. As a matter of fact, none of their starting lineup is batting .300 (with only a scant few over .275). In addition, Bard and Bowen have combined to allow 51 stolen bases. Saltalamacchia has the skills both offensively and defensively to make a huge difference to the Padres, who are battling against the Dodgers for the NL West.

Obviously, it would take more than just Saltalamacchia to get Peavy. With that in mind, Iâ€™d be willing to make minor league LHP Matt Harrison available. Heâ€™s probably the top pitching prospect in the Braves farm system and is having a great year at AA Mississippi. Heâ€™s currently 4-1 with a .304 ERA and OBA of .247. It wonâ€™t be long before heâ€™s ready to come up and he should make a solid #3 starter.

Iâ€™m imagining it could take a little more to sway the Padres to let go of Peavy (if theyâ€™d even let go of him), so Iâ€™d be willing to throw in another minor leaguer, just not sure which one. The deal might best be done as a three-way deal with another team if thereâ€™s something specific the Padres need.

While we may need an outfielder like Milledge in the future (if Andruw is gone after this season), Iâ€™m not willing to give up Saltalamacchia for anything but an amazing starter right now.

8. Let’s play manager. Two out, bottom of the ninth, you need a base hit to win, and Chipper’s not available. Who do you want to see at the plate against the Mets?

Iâ€™m probably the only Braves fan who will say this, but Matt Diaz. Going into this past weekend, his .467 batting average led the National League in pinch hitting situations. Heâ€™s batting .352 on the season and was 7 for 12 this past weekend against the Red Sox. For some reason, most Braves fans arenâ€™t big on him, but I always have faith in him in a pinch!

9. Going the inverse route: what Mets batter do you most fear in the same situation?

Thanks again to Kristi Dosh of Chop-N-Change for providing her insights.