Mets vs. Phillies – Stay with Us, Lady Luck 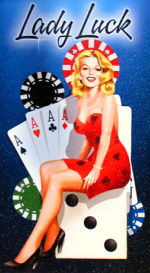 First off, let’s try not to look at this series as something more than it is. We can bask in the glory of first place, and if the Mets take at least two games this weekend, we can continue to gloat and enjoy all that goes with being the fan of a first-place team.

But, this series is unlikely to define the season, or the team, that we will be watching through the next 140 or so ballgames.

The good news is, the Mets have the momentum of a sherman tank plowing down Mt. Everest. Lady Luck has touched the Mets over the past week and a half, delivering teams that were at less than their best for one reason or another. That’s not to take anything away from the Mets — everyone needs a little luck now and then, but it’s what you DO with that luck that matters. And the Mets have taken full advantage of a downtrodden Cubs club, the bumbling Braves, and the debilitated Dodgers. Similarly, the Phillies are in a funk, suffering from the following:

– temporary closer / main setup man Ryan Madson was just placed on the DL (broken toe)
– main closer Brad Lidge comes off the DL today, but hasn’t thrown a meaningful pitch in 2010
– main LOOGY, #2 setup man and constant Met killer J.C. Romero just came off the DL a week ago, and has been shaky in his first two appearances
– slugger Raul Ibanez is in a horrendous slump
– starting shortstop and sparkplug Jimmy Rollins is on the DL, replaced by a combination of Juan Castro and Wilson Valdez. You remember Wilson Valdez?

Sure, you could argue that the Mets are at less than 100% because Carlos Beltran, Sean Green, Ryota Igarashi, Daniel Murphy, and Kelvim Escobar are on the DL. But, in truth, would you rather have Green or Jennry Mejia? Murphy or Ike Davis? Escobar or someone who can lift his pitching arm? With Igarashi, there’s some argument. As for Beltran, I’ve crossed him off for the season since early February, and if the Mets planned differently, shame on them — his ability to play in 2010 should be considered a bonus.

Further, this weekend’s pitching matchups appear to favor the Mets …

Game 1, Jon Niese vs. Kyle Kendrick:
Niese has pitched about as well as one can expect from a fifth starter, posting a sparkling 3.68 ERA despite allowing nearly two baserunners per inning (ah, Lady Luck strikes again!). In contrast, Kendrick has been downright awful (and not nearly as lucky), averaging barely over 4 innings per start with a 7.71 ERA. We’ll see whether Lady Luck will travel with Niese to the comfy confines of Citizens Bank Park, but on paper, it appears the Mets have an advantage.

Game 2, Mike Pelfrey vs. Roy Halladay:
Obviously, no lineup is anxious to face Halladay, who has few peers. However, if you were to pick anyone in baseball to face “Doc” right now, the red-hot Big Pelf would certainly be on your short list. Pelf’s microscopic 0.69 ERA and 24 consecutive scoreless innings were not quite enough to usurp the NL “Pitcher of the Month” for April, but they have instilled the big righthander with a confidence he’s never had before. In mid-July, we may or may not be mentioning Pelfrey in the same sentence with Halladay, but right now, we can. If there is ever a time in the career of Mike Pelfrey that one can say he is up to the task of facing the best pitcher in MLB, it’s this Saturday.

Game 3, Johan Santana vs. Jamie Moyer:
Must we even belabor this topic?

Looking purely at the pitching matchups, there’s every reason to believe the Mets have a shot to take two games this weekend. Add in the fact that the Phillies are less than fully stocked, and have recently been stumbling, and all signs point to the possibility of a pleasing weekend for Mets fans.

That said, enjoy the weekend, stay in the moment, and keep focused on the here and now.

Back Another Phillie Fan Perspective
Next Mets Game 23: Win Over Phillies