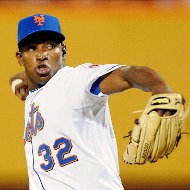 Unlike Johnson, however, Manuel was in the desperate situation of saving his job – with some projecting he’d never make it through May. Desperate times call for desperate actions, and loading the bullpen with 99-MPH bullets seemed to Manuel to be his best chance for short-term survival.

The original thought was that Mejia would stay with the big club if he filled a prominent role in the bullpen – i.e., as a late-inning reliever. And though he appeared in 18 of the team’s first 37 games, his role was hardly established. Sometimes, he came in to mop up; other times; as a one-out guy, occasionally, in high-leverage situations. The way he was used was just as illogical as the frequency in which he was used. Supposedly, this was the Mets’ top pitching prospect — one of the few golden arms in a shallow farm system – yet he was on pace to appear in 80 games, often in situations that had little bearing on the outcome of the ballgame.

Considering the way he was (ab)used, Mejia pitched fairly well. At times, he excited us with his triple-digit heat and hard-breaking slider. Overall, though, he looked like a kid with intriguing talent that needed further polish at the lower levels. Eventually, the Mets saw the error of their ways and returned Mejia to the minors – where he returned to starting pitching. Not surprisingly, Mejia suffered a rotator cuff strain in late June. After being shut down for several weeks, he pitched well in AA and was inexplicably rushed back to the bigs in September to pitch in more meaningless games. Manuel’s fate was sealed by then, so the only reason for the promotion was to sell tickets. As it was, Mejia made three ho-hum starts before injuring his shoulder a second time; an MRI revealed a rhomboid strain of the right shoulder blade.

Despite Mejia not being ready for the big leagues as of Opening Day 2010, taking steps backward over the ensuing six months, and suffering two shoulder injuries, nearly everyone associated with the Mets considers the young righthander a solid candidate for the 2011 rotation.

Sorry, but I don’t share the expectation – not in 2011. Right now, Mejia is recovering from shoulder problems that are due to both inappropriate use and flawed mechanics; the first can be easily fixed, the second cannot. Assuming the very best – that Mejia comes back 100% healthy – he remains a unpolished enigma with untapped potential. He lacks command of his pitches for the same reason he has shoulder problems – poor, inconsistent mechanics. If the plan is to send him to A or AA ball and allow him to smooth out his issues, he has a chance to some day fulfill his potential. If the Mets continue to push him to be an MLBer using his current toolset, I’m not sure we’ll see anything more than flashes of brilliance couched by maddening bouts of inconsistency and chronic injuries. He has the talent and the mindset to one day become a solid – perhaps very good – Major League pitcher; all he needs is the time to get there. Whether the Mets afford him that remains to be seen.

Back Quick Primer on Wally Backman
Next 2010 Analysis: Pat Misch