Hat tip to xDanTanna on Twitter, who originally notified Mark Healey of Baseball Digest via this tweet: 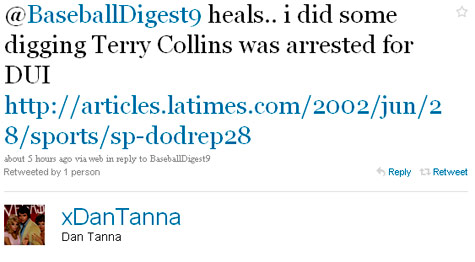 xDanTanna also sent the same link to SNYtv, David Lennon, and Steve Popper — but none have reported it yet (though, Popper did acknowledge it). Interestingly, xDanTanna also tweeted this:

And this is one of the reasons (other than the fact I feel he is the best choice) that I have been “campaigning” for Wally Backman, and “tearing down every other candidate”: because the majority of the press and pundits have been quick to point out all of Backman’s supposed flaws and baggage, while glazing over or completely ignoring the blemishes on the resumes of the other candidates for Mets manager.

Of course, I wouldn’t just read one tweet and assume that Collins was indeed arrested for a DUI in 2002 — even if it is published in the archives of The Los Angeles Times. But, another fifteen minutes of web research corraborated the report.

From the Augusta Chronicle (GA):

Former major-league manager Terry Collins was arrested in Augusta early Thursday morning and charged with driving under the influence of alcohol, according to the Richmond County Sheriff’s Office. The 53-year-old Collins, in his first year as minor-league field coordinator with the Los Angeles Dodgers, was stopped by police on the 3100 block of Washington Road at around 2 a.m. Collins, who managed the Houston Astros (1994-96) and Anaheim Angels (1997-99), was also charged with operating an unsafe vehicle and driving without a license on his person. “He was driving down Washington Road on a flat tire, which is what drew our attention to him,” said Maj. Richard Weaver of the Richmond County Sheriff’s Office. “He just kept driving.” Collins pulled over when deputies turned on the blue lights, Collins then stumbled out of his vehicle, police said. “He was staggering,” Maj. Weaver said. “He was obviously impaired and failed a sobriety test.” After Collins was arrested, he was taken to the Richmond County Jail, where he failed a Breathalyzer test. Collins did not bring attention to his celebrity, but after a jailer recognized him, he admitted to being a former major-league manager. He remained in jail for 14 hours and was released after meeting bond requirements at 4:10 p.m., jail officials said. Collins was in Augusta to join the Waves, a Dodgers affiliate based in Albany, Ga. He did not attend Thursday’s game.

The point here is not to smear the reputation of Terry Collins; rather, it is to keep everyone on a level playing field. If the media is going to make sure the world knows about the negative parts of Wally Backman’s past history, then it is only fair that the public knows about similarly negative tidbits that may or may not mar the perception of Terry Collins, Clint Hurdle, etc.

In other words, no one is perfect — and if a journalist is going to dig up one person’s past, he has a duty to dig up EVERYONE’s past.

Let’s hope that Sandy Alderson, Fred Wilpon, and the rest of the Mets’ front office has done their due diligence and run background checks on all the candidates. It would be really embarrassing to hire a manager and then have to fire him a few days later after “new information” comes to light (I feel like that’s happened before to a Major League club …).

Back 2010 Analysis: Ike Davis
Next Condolences to Sandy Alderson