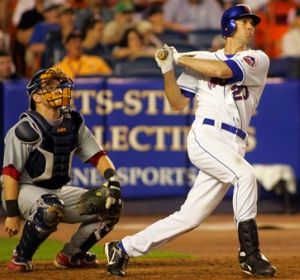 After being no-hit for eight innings, Shawn Green finally broke the Mets offensive drought with a 410-foot blast off the scoreboard in the bottom of the eleventh — his second career homer off Cardinals reliever Russ Springer (against whom he is now 2-11).

Aaron Heilman scooped up the win, topping off a fine performance by the Mets bullpen.

It shouldn’t have lasted that long — not with scrubs such as Mike Maroth and Ryan Franklin leading a severely decimated Cardinals team — but we’ll take it. 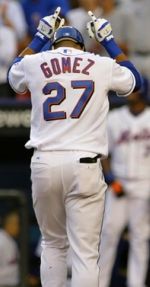 As usual, the Mets got on the board first, this time via a monster solo homerun into the bleachers by rookie Carlos Gomez in the bottom of the third inning. However, the Mets didn’t get another hit for the rest of the game, and the Cardinals scratched out a tying run in the fifth using picture-perfect fundamentals. Adam Kennedy led off with an infield single that Jorge Sosa couldn’t handle, and advanced to second when Gary Bennett scooted a grounder through the right side. Mike Maroth followed with a hard bunt to David Wright to move the runners to second and third — no one’s quite sure why the Mets weren’t defending it more aggressively, and using the wheel play, considering that Maroth had bunted successfully only three times prior in his MLB career. So Taguchi then hit a simple ground ball on a 2-0 slider to second base that scored Kennedy with the tying run. Taguchi could have muscled up on the 2-0 count, but was smart enough to wait back and simply get the bat on the ball to score the run — that’s what team hitting is all about.

Jorge Sosa pitched six full innings, allowing only one run on six hits and two walks, but was removed after throwing 101 pitches.

Joe Smith replaced Sosa in the seventh, but walked leadoff hitter (is it appropriate to call him a “hitter”?) Gary Bennett. Maroth followed with two attempted sacrifices, then slapped a base hit past the drawn-in David Wright like he’s been doing it his whole life. And we thought it was Carlos Delgado’s birthday. So Taguchi then showed bunt but pulled back and swung, while Bennett (the catcher) and Maroth (the pitcher) pulled a double steal — drawing no throw from Paul LoDuca. Eventually, Taguchi grounded out to second, and the runners held. Smith then fanned Aaron Miles on a high slider for the second out, and intentionally walked Albert Pujols to load the bases. With switch-hitting Scott Spiezio up at the plate, Willie Randolph chose to remove Smith and bring in lefty Pedro Feliciano, despite the fact tha Spiezio was batting .341 against lefties and only .261 vs. righties. Feliciano fell behind 2-0, then snuck a questionable strike off the outside corner. Spiezio hit the next pitch right back to Pedro, who ran halfway to first before flipping to Delgado for the final out, leaving the bases loaded.

Feliciano then set the Cardinals down in order in the top of the eighth to hold the tie, and Billy Wagner did the same in the ninth.

Strangely, Randolph sent Wagner back out to pitch the tenth, despite the facts that he threw 17 pitches and might be needed again in the next few days. I wonder if Willie is trying to stretch Billy out a bit, with the Phillies series upcoming. Wagner is not getting many saves chances this year, as the Mets have either been ahead or behind by more than a few runs in most games. Perhaps the inconsistency of Aaron Heilman and Guillermo Mota has Willie considering four- and five-out saves in Billy’s future. Then again, he may have simply wanted Wagner — rather than anyone else — facing Pujols in the top of the tenth.

Sometimes I wonder why Billy Wagner screws around so much with the slider against weaker hitters. Against good ones, fine, but he threw it three times to light-hitting Gary Bennett before incuding a groundout, then twice to Ryan Ludwick in falling behind 2-0. He then reared back and threw four fastballs past Ludwick (the ump missed one of them) — including one clocked at 99 MPH on the gun. When you throw that hard, from the left side, and can spot it at the knees, why use the slider for anything other than a show pitch against a backup catcher and a AAAA outfielder?

Randolph again rested Ruben Gotay to preserve his .300 average. Gotay is most likely the guy to go down when a minor league starter (Mike Pelfrey?) is brought up to start in the Friday doubleheader against the Phillies, and also the odd man out when they need to bring up a catcher to back up Ramon Castro during Paul LoDuca’s two-game suspension. After all, the Mets can’t afford to lose future Hall-of-Famer Ricky Ledee from their bench.

Gold Glover Albert Pujols made two errors in the game. Sorry, I just like to point out anything negative concerning Prince Big Mouth.

Another 7:10 PM start with the Mets sending Oliver Perez to the mound against either Todd Wellemeyer — who’s nursing a sore wrist — or Brad Thompson.

I’ll be in the Loge Level, Section 20, in the Mr. Met shirt, if you want to stop by for a beverage and some Mets chattering.

Back Series Preview: Mets vs. Cardinals II
Next 5 Reasons Why Billy Wagner Rocks