Would Mets Bid for Albert Pujols? 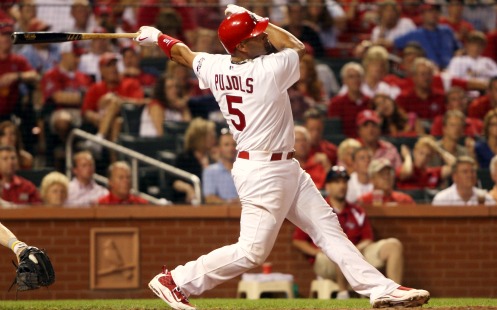 According to the St. Louis Dispatch, the Cardinals have begun discussing a contract extension with Albert Pujols. Per most reports, Pujols wants to get something done before spring training begins, and if nothing gets done before ST, he prefers not to talk contract at all until after the 2011 season — when he has the opportunity to become a free agent.

Though it appears that the Cards and Pujols will indeed get something done before Valentine’s Day, one never knows — as of this moment, his contract ends at the conclusion of the ’11 season. And if Albert Pujols became a free agent, would the Mets be in the bidding?

Considering Pujols’ status as The Best Player in Baseball, his price tag would be high. Very high. So high, in fact, that only a small handful of teams could afford it. The Yankees and Red Sox come to mind immediately, of course. But both of those teams already have outstanding first basemen with long-term contracts in place (we’re assuming that the Bosox and Adrian Gonzalez have a gentlemen’s agreement in place for an extension). The Phillies suddenly are big spenders, but they have Ryan Howard entrenched at first. The next “big market” clubs would be the Dodgers and Cubs, I suppose. The Nats, no doubt, would be in play. And the Mets, of course. Remember, no matter what Sandy Alderson says publicly, they DO play in the media capital of the world, so by default they’d have to at least consider the possibility of making a bid.

And why wouldn’t they? There will be some $40M – $60M coming off the books after 2011. Sandy Alderson insists the team won’t spend it all, and won’t lock into any long-term deals, but this isn’t Jayson Werth or Adrian Beltre — this is Albert Pujols. It would seem that a team losing Carlos Beltran and likely Jose Reyes would be in the market to make up that production — rebuilding or not — and they could make up for both players by signing one, if that player is Pujols.

I know at least one of you is going to want to mention Ike Davis in the comments. Please try to refrain from doing so, as I can’t afford to break my neck after falling off my chair in laughter. Don’t get me wrong — I like Ike — but I wouldn’t pass on an opportunity to obtain the most productive offensive player in MLB because of Ike. Rather, I’d look at Ike as a surplus trading chip who can be flipped to fill a whole elsewhere on the field (or mound).

Let’s get something else straight: I can’t stand Albert Pujols. I might hate him, even. Having him put on a Mets uniform would be similar — to me — to the day Tom Glavine signed with the Mets, and the day the Roberto Alomar trade was announced. It would feel all wrong. It would genuinely anger me. My heart would not be into it; but my mind would understand why it made sense.

Likely, Pujols will command a contract that calls for $25M-$30M per season, and he’ll probably want — and get — at least a 6- to 7-year deal (maybe more). He’ll be 32 years old when the 2012 season begins, and if you believe he is, and will remain, 100% clean, there is a strong possibility that his skills will deteriorate as he nears and passes his mid-30s. Considering that Pujols has hit 40+ HRs and posted an OPS over 1.000 in each of the past two years suggests that even with a dropoff in production, he’d still be better than most — it’s reasonable to suspect he’d drop to “only” 30 HR and an .875-.925 OPS, which is about where David Wright performed in 2008. Though, there is also the possibility that his skills erode dramatically, the way they did for Robin Ventura at age 32.

It’s probably a complete fantasy, but if it turns out that Albert Pujols is a free agent next winter, could you see the Mets getting into the bidding? Would you want them to sign him? Or would you be fine with the Nationals swooping in and making the biggest splash in their short history? Why or why not?