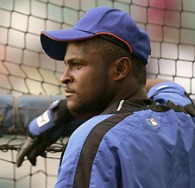 Let’s pretend Castillo had a key and opened the door to Tradition Field for Oliver Perez last week, and the two of them embarked on a high-energy workout to get the spring going. In turn, the beat writers and on-site bloggers wrote optimistic stories about how the two players have recaptured the passion, are in the best shape of their lives, and are determined to be key factors in leading the Mets into the postseason. How would you react?

1. You wouldn’t believe it.
2. You’d think, “figures they do this now, in their walk year, to earn another contract next winter”.

But let’s get back to reality. Castillo arrived on time. It doesn’t matter how he starts spring training so much as how he finishes it; by the time April rolls around, no one will remember nor care what day he reported to camp. He is lumped into a disjointed competition for the second base job with the positionless Dan Murphy, the underappreciated Justin Turner, and Rule 5 pick Brad Emaus. We are all expecting Turner to return to AAA because he has options remaining, and many of us are picking Emaus as our “favorite” — despite not being able to recognize him if he were sitting across from us and despite never witnessing him take one at-bat — mainly because he’s new and therefore must be better. If Emaus can’t win the job, we’re assuming that Murphy is the next-best bet — assuming he remains healthy and doesn’t look too much like Dan Uggla in an All-Star Game. No one wants Castillo to win the job, under any circumstance.

But what if he does? What if Castillo IS in the best shape of his life — or at least, in good enough shape to win the job? It’s not completely out of the realm of possibility for Castillo to look 100% and perform well over the course of 4-5 weeks. When healthy, he is a much better fielder and runs faster than all of the other candidates. He won’t be able to compare with the others in regard to hitting power, but he does have a keen ability to get on base via the walk and bloop single.

Imagine this scenario: Turner, Emaus, and Murphy all struggle with the bat, and all display their defensive shortcomings. Castillo hits .400 in the spring, has healthy legs, and turns the double play like it’s nobody’s business. He wins the starting job, Turner and Murphy go to AAA, and Emaus is returned to the Blue Jays. What does this mean for the New York Mets in 2011 and beyond?