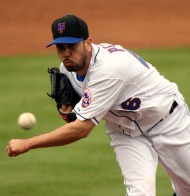 Oliver Perez was, unsurprisingly, unimpressive in his latest spring training outing, allowing three earned runs on four hits and two walks in three innings. His velocity “jumped” to the 84-88 MPH range, which is still much too slow for someone who has neither command nor savvy.

At this point, Perez has been eliminated from the starting rotation competition, and he’s unlikely to have much chance of earning a long relief or middle relief role. His best chance to make the 25-man roster is to be a LOOGY.

Can Oliver Perez be a LOOGY? I think there’s a possibility, and certainly he has a better chance at being a specialist than in any other role. But how?

Here’s my idea: throw the slider, every single pitch. It worked for Sparky Lyle back in the day, and it could work for Ollie. If I were the Mets pitching coach, I’d tell Ollie that he has to use the same exact mechanics every single pitch and throw only the slider. At least part of Ollie’s issues is his inability to repeat his mechanics and the varied arm angles he fashions. Without 93+ MPH velocity, Perez’s best chance to make batters swing and miss is by throwing his hard slider. If he focused only on the slider, and concentrated on his mechanics to get the most bite and consistency possible from that one pitch, he just might have value facing one or two lefthanded batters per game.

Why should the Mets bother with such a project? Because regardless of whether he stays with the Mets or is released, he will be paid $12M this year. Maybe — just maybe — Perez can become a valuable LOOGY by throwing one pitch and one pitch only. And if he does reinvent himself as a “lights out LOOGY”, he’ll have value at the trading deadline to a team vying for a postseason spot — and thereby become trade bait for a minor leaguer or two (not to mention having $6M left of his salary taken off the books).

It’s a longshot, I know, and probably unrealistic. But at this point, what do the Mets have to lose?

Back Dykstra is as “Nails” as Sheen
Next Mets 2010 Commercial