Aryans Not Supreme After All

There is one positive factor in the Mets’ favor this weekend: both games will be played in the daytime, and Rangers superstar Josh Hamilton is hitting a whopping .122 in daytime games this season.

Why is he hitting so poorly in the daylight? Hamilton offers this explanation:

“Try to go up [to the plate] squinting and see a white ball while the sun is shining right off the plate, you know, and beaming right up in your face.”

But wait, it gets better — an enterprising journalist found an optometrist to support this seemingly implausible excuse:

Dr. Richard L. Ison, an optometrist since 1990 who is practicing in Murphy, Texas, said it’s true that having blue eyes makes it tougher to see during the day than those with darker eyes.

“Because of the lack of pigment in lighter color eyes — like blue or green eyes as opposed to brown — you get a lot more unwanted light and that can create glare problems,” Ison said.

Ison said the phenomenon is called intraocular light scatter, meaning the light scatters as it enters, producing a focal point that isn’t as good.

So much for Adolf Hitler’s theory that the blond-haired, blue-eyed people were superior to everyone else. Perhaps Germany would have won WWII if only they avoided daytime battles, eh?

Before you roll your eyes (pardon the pun) at this idea that blue-eyed folks can’t hit well in the daytime, you might want to consider the research. There is definitely scientific evidence about the blue-eye / bright light phenomenon. The only reason I know this is because my (blue-eyed) grandfather suffered from macular degeneration, and from research I learned that people with blue eyes may be susceptible to the disease because:

Melanin, the substance that gives eyes their color, protects the macula by trapping light rays so they don’t reach the macula and cause damage. People with fair skin and blue or light-colored eyes may be particularly susceptible to macular damage by blue light because they have less melanin in their irises. Their blue eyes transmit up to one hundred times as much light to the back of the eye as dark colored eyes do. Additionally, when the light reaches the choroid and RPE of people with fair skin and blue eyes, there is less melanin there to absorb the radiant energy, leaving these tissues more vulnerable to light damage.

Why hasn’t anyone before noticed that blue-eyed players don’t hit well during the day? Maybe because it hasn’t been all that common. And probably because prior to modern stadium lighting, vision was more difficult for everyone during night games. Further, it may be possible that this “handicap” is insignificant in the grand scheme of things. It could be that Hamilton’s issue is more mental than anything else; once something gets in your head, it’s hard to get it out.

Of course, Hamilton can counteract the daylight issues with some eye black and a pair of these snazzy blue-blockers: 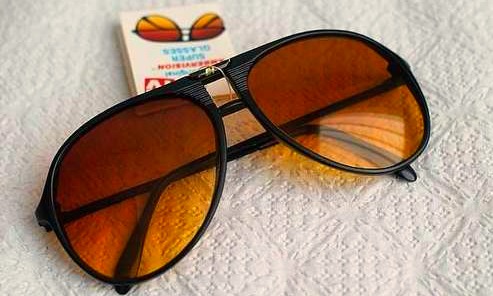 What do you think? Is this a bunch of nonsense? Is it plausible?

And hey, if you happen to be an eye specialist, we would especially like to hear your opinion.

Back Mets Game 76: Loss to Rangers
Next Davey Johnson Hired – Will Wally Backman Get Called?