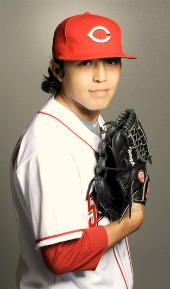 Sorry for the pun, I couldn’t resist. But seriously, people call him Danny. And yes he’s small in stature compared to most big league pitchers. However he has a huge heart, is a competitor, and wise beyond his 26 years.

He has to be, because he fits the “soft-tossing lefty” descriptor to a “T”, considering that his fastball averages about 84 MPH and he throws a change-up in the 60s. You’ll also see him throw a screwball (which really is a type of change-up), a slurve, and rumor has it he’s tinkering with a knuckleball. Considering that his change-up barely breaks the highway speed limit, one has to wonder: will the knuckleball be so slow it will go backward? I’m having visions of Bugs Bunny perplexing the Gashouse Gorillas with his super slow ball.

Danny Herrera has 115 games of MLB experience under his belt, going back to 2008. He appeared in 70 games with the Reds in 2009, posting a respectable 3.06 ERA and so-so WHIP of 1.41. So when Mets GM Sandy Alderson stated that one of the PTBNLs was “already successful at the Major League level”, he was obviously talking about Herrera — who also pitched in 36 games for Cincinnati, with less success, in 2010. Prior to joining the Reds, Herrera pitched in the Texas Rangers’ organization — and would you believe he was one of the two players traded for Josh Hamilton? That’s something to tell his grandkids some day.

Personally, I’m excited about Herrera joining the Mets bullpen, and anxious to see his first appearance. The fact he’s working on a knuckleball is of huge interest to me, considering that he will have the opportunity to discuss the pitch with R.A. Dickey for at least a month; who knows where that might lead? Call me crazy, but I’m seeing Dickey be to Herrera as Hoyt Wilhelm was to Wilbur Wood (not sure what I’m talking about? Don’t worry, we’ll get into it another day).

If nothing else, Danny Herrera is already shaping up to be the next Flushing fan favorite. Alderson, I’m sure, is hoping he’ll be the inexpensive replacement for Tim Byrdak in 2012.

What do you think? Are you interested in seeing Herrera take the mound?

Back Mets Get Rejects in Return for K-Rod
Next Mets Game 136: Win Over Nationals