Who Is Brad Peacock?

Tonight the Mets face Nationals rookie pitcher Brad Peacock. Why do we care? A few reasons …

First of all, Brad’s a “Peacock”, and so am I. Well, my name obviously isn’t “Peacock” but I played baseball for the St. Peter’s Peacocks (did you know SPC is the only athletic team named for that fancy bird? I digress …).

Second, this featherless Peacock is an intriguing prospect — and someone we may be seeing regularly going forward. 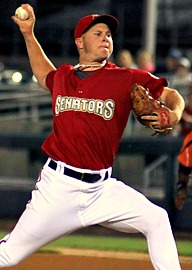 Brad Peacock was a 41st-round selection in the 2006 draft, taken out of Palm Beach Central HS in Wellington, Florida as a “draft and follow”, meaning, the Nats had a year to sign him; it was the last year such a thing existed (the Mets chose Pedro Beato as a “draft and follow” in 2005, but failed to sign him before the ’06 draft). It’s not common for a pick that late to make it all the way to MLB — he’s the first from that ’06 round to make it, in fact, and only the third Nationals pick overall to join the big club from that draft (the others were Chris Marrero and Cole Kimball). The Nats chose quite a few high schoolers that year, and obviously, not many of their picks have panned out just yet. Peacock, though, has risen steadily through the system, and may not be returning to the minors.

Originally a third baseman for his high school team, he occasionally came in as a closer, pitching all of 11 innings as a senior. He was under six feet tall at the time and weighed 160 pounds soaking wet, but the Nats liked Peacock’s arm and gambled that his 84-85 MPH velocity would increase as he matured. Peacock spent a year at Palm Beach Community College, focusing on pitching, and the radar readings eventually jumped over 90 — consistently. The Nationals signed him in May of 2007 (he passed up a full ride to Florida Atlantic) and his pro career began.

However, his first few seasons were inauspicious. Though his velocity continued to increase — into the mid-90s — he struggled with his command and his strikeout rates were too low to be considered a “prospect” — generally in the range of 6 K/9 IP. Last year, though, things started to come together. Peacock gained better control of all his pitches and was regularly touching 96 MPH. Though he posted a 3-11 record and 4.50 ERA between A and AA, he struck out over 9 batters per nine innings, and had three times as many Ks as walks.

He took another huge step forward this year, dominating AA; many believe he was the most impressive pitcher in the Eastern League, a circuit which also includes highly touted hurlers such as Dellin Betances, Manny Banuelos, and Jacob Turner. In 98 innings for Harrisburg, Peacock posted a 2.01 ERA, 0.86 WHIP, 129 Ks, and only 23 walks. That earned him a promotion to AAA, where he went 5-1 with a 3.19 ERA, 1.25 WHIP, 48 Ks and 24 BB in 48 IP. With rosters expanding, the Nats decided to promote him one more time, and he made his MLB debut a week ago, allowing a run on 4 hits in an inning and a third vs. the Dodgers. Not impressive, obviously, but it was only his debut.

Tonight he makes his first-ever MLB start. You should expect to see him working the corners with a fastball that sits in the 92-94 MPH range, and occasionally can be cranked up to 97 (though, scouts say it’s pretty straight when it’s at that velocity). His breaking pitch is a nasty knuckle-curve that breaks 12-6, and he also will mix in a change-up that needs significant improvement. In the minors, he was as tough on lefties as he was on righties; we’ll see how that plays out against the big boys. He’s a lean 6’1″, 180 pounds, which many consider “slight” in today’s game, where pitchers are expected to resemble NBA power forwards. Because of his size and velocity, some believe his future is in the bullpen — but then, they thought the same of Pedro Martinez. I’m not saying this kid is another Pedro — not by a longshot — but if he can consistently command three pitches I don’t know why he wouldn’t be able to remain a starter. Of course, that remains to be seen.

We’ll get a glimpse tonight of what the future holds for the 23-year-old righthander. A few are suggesting that he’ll crack the 2012 Washington rotation, which would be quite a feat for a former 41st-round pick.

You may still be wondering why I’m spending so much time discussing a Nationals prospect. I guess part of it is that there isn’t much to say about the Mets’ September callups. More toward that point, I think it’s important that we occasionally walk out of Metsworld and acknowledge that there are other teams out there, and some have prospects who compare to, or are ahead of, the highly touted youngsters in the Mets’ system. This year, I’ve seen and heard a lot of hype around Matt Harvey, Jeurys Familia, and more recently, Zack Wheeler, as pitchers that Mets fans can look forward to, and as evidence that good times are ahead. I’m not denying that those three hurlers may one day reach the bigs, nor am I doubting the Mets won’t improve with youth in the next few years. But, I would like to point out that for every Harvey, there’s a Peacock — who is already being tested at the big-league level. In other words, the Mets aren’t the only team who have intriguing flamethrowers in their system. This isn’t meant to be critical — it’s only a reminder that every team has prospects, and won’t be standing still while the Mets rebuild their franchise.

The main reason I wrote this, though, is because I’m fascinated by Peacock’s climb up the ladder from such humble beginnings. It’s a nice story to see someone start from so low — barely a prospect — all the way to the bigs, and have genuine potential for future success. He might not turn out to be a star; heck, he might not be more than a so-so middle reliever when it’s all said and done. But still, I’ll be pulling for him — just, not tonight.