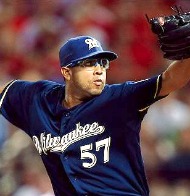 On Tuesday, reliever Francisco Rodriguez told a national baseball columnist that he wasn’t happy with the lack of save opportunities he’s had since the Milwaukee Brewers traded for him in July.

When asked about his comments a day later, Rodriguez didn’t back off.

“I wasn’t lying,” he said before the Brewers’ 6-2 loss to the Colorado Rockies on Wednesday.

“There’s been plenty of save opportunities, and I’ve pitched once in the ninth inning and it wasn’t a save.

“I’m not happy. That’s the bottom line for me. They told me one thing; they haven’t done it. And I stand by what I said.

“I’m not lying. I’m not creating something out of nowhere. I’m just saying the facts, and that’s pretty much it.”

Never mind that the Brewers are eight games away from clinching the NL Central. Never mind that Milwaukee closer John Axford has 42 saves this year, including 39 in a row. Even if those issues didn’t exist, K-Rod is a selfish crybaby who cares more about himself than the team he plays on. And that’s fine, if he doesn’t care about winning — if all he cares about is stockpiling stats and millions of dollars. Hey, he already has a World Series ring, so why should he care about getting another one?

With these words, Rodriguez has done nothing to help his team. Instead, he’s created an unnecessary disturbance that may cause a rift in the clubhouse. Maybe that by itself won’t have any effect on whether the Brewers go far in the postseason — because “clubhouse chemistry” can’t be quantified and therefore a myth, right? And this winter, some team will look past this incident (and last year’s assault) and shower him with millions to close games for them. Hey, that will be great for fantasy baseball owners!

What a beautiful world we live in.

I’m sure there are people who disagree with my criticism, and that’s fine. Who am I to judge, after all? But selfishness is poisonous, no matter where it’s found, and in terms of teams — athletic or otherwise — there is no room for it. Getting a group of people totally dedicated and focused on a goal is a wonderful thing, because together, people can accomplish far more than what can be done individually. As a Mets fan, I’m happy K-Rod is no longer in the orange and blue — I’m more interested in seeing a winning team than watching individual stars, and selfish players make that more difficult than it already is. Even if K-Rod was still around and did help the Mets win, knowing how selfish he is makes rooting for the team less enjoyable. But — that’s just me.