Mets Grab Geren – But Who is in Charge? 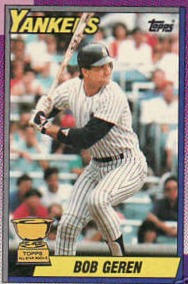 Big news in Flushing — the Mets have hired former Oakland Athletics manager Bob Geren to be their 2012 bench coach.

The hiring comes as a surprise, since Bud Selig / MLB generally ask that teams hold off on huge announcements at this time of year, so that focus does not waver from the excitement of the postseason. But those brash and defiant Mets — who once almost wore illegal hats in a baseball game — laughed off such policy and came out with the news anyway.

What? The hiring of Geren isn’t big news to you? Maybe because you’re still on the edge of your seat waiting to hear who the first-base coach will be. Or, maybe you’re more focused on whether the Mets will take advantage of their exclusive negotiating window and talk to the agent of a certain switch-hitting shortstop.

In all seriousness, I find the hiring of Geren interesting, in that it smacks of a Sandy Alderson move. Whether that’s good or bad is hard to measure — it all depends on your perspective, which we can argue in the comments. To set up the discussion, consider these factors:

1. Terry Collins‘ choice for bench coach was his good friend Jim Riggleman. So, you could look at this as Alderson making a power play — though, not necessarily as an ego thing. I’m sure that Alderson genuinely prefers Geren for valid reasons, but the point is that ultimately, the Mets hired Alderson’s guy and not Collins’ guy — even though Collins is the one who will work most closely with the new employee.

2. The hiring of Geren comes off the heels of Chip Hale‘s move to Oakland, and the firing of Ken Oberkfell. Both Obie and Hale were leftovers from the “previous regime”, and rather than promote from within, Alderson chose someone outside the organization. At the same time, though, Alderson DID promote Tim Teufel to third-base coach. Which brings me to the third consideration …

3. Was Bob Geren really Alderson’s hire, or was it Jeff Wilpon’s? Further, was the hiring of a bench coach given to Alderson because Jeff had dibs on the hiring of a third base coach? Teufel is a longtime friend and trusted soldier of the Wilpons, and as such this promotion could be interpreted as a personal reward as much as it was one for performance.

I know a lot of Mets fans would like to believe that Sandy Alderson holds the Mets future in his hands. Those of you who have that belief probably also think that Omar Minaya singlehandedly “destroyed” the organization. Maybe you’re right, but I have my own conspiracy theories, and would just like to point out little things here and there that could support my silly ideas (hey, with no Mets games going on, there’s a lot more time to dream up this stuff).

There have been rumblings from “those in the know” that Alderson is already growing tired of “arrangement” that looms above him — and by that I mean the owners’ exercising their right to have a say in what happens with their company. A year ago, ownership was in a precarious position: they were in financial straits, were coming off two consecutive poor seasons, and had the Irving Picard suit looming. They were down, and they needed help. In response, Bud Selig sent Alderson in to Flushing on a white horse carrying a sack of secret cash to help turn things around. A year later, things are looking just a bit brighter for Mets ownership. For one, the Picard suit looks like it will cost them almost a billion dollars less than they thought. Further, Alderson has and is continuing to slash payroll. And, ownership seems to feel confident they can pull in a few investors over the winter. Those three developments have made the future look a bit brighter, and perhaps injected the Wilpons with just a bit of chutzpah. Why is this important? Because if they feel as though they’re “in the clear”, Fred and Jeff Wilpon are likely to go right back to doing what they’ve always done — which is, run the Mets. Again, that’s their prerogative — it IS their company, after all. For those who forgot, the Mets have been the Wilpons’ company exclusively since 2002, when they purchased the other 50% of the franchise from Nelson Doubleday (ironically, with some help from their good buddy Selig’s accountant, who Doubleday felt was “cooking the books”).

The Mets record since the Wilpons took over complete ownership in 2002? 795-823, for a .491 winning percentage. In those ten seasons, the Mets won the NL East once, reaching the postseason once. They’ve been through 5 managers and 4 GMs in those 10 seasons.

What do you think about this hiring of Bob Geren? Is it a clue to the beginnings of a behind-the-scenes power struggle? Or am I off my rocker creating conspiracy theories for lack of better content? Looking forward to your thoughts in the comments.