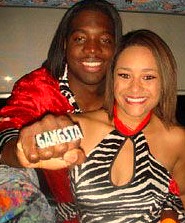 Traditionally, some Americans have had trouble adjusting to the highly disciplined, perfectionist approach to baseball in Japan. Former US stars such as Bob Horner, Joe Pepitone, and Jesse Barfield had some difficulties in The Land of the Rising Sun, but Milledge’s humble, disciplined, and hard-working history make him ideal Nippon Professional Baseball material.

“Sure, Lastings may take some lumps initially, but knowing his charming personality and legendary work ethic, he should have no problem at all,” said Shetter.

The idea for the show – which will appear every Tuesday night from 2:30 AM to 3:30 AM on ESPN The Ocho beginning next spring – was a brainstorm by Lastings’ agent Luscious Orange, who came up with the idea after watching the movie “Mr. Baseball”, starring Tom Selleck.

“I was thinking, man, that dude has a great mustache, and so does ‘Stings’,” said agent Orange, “so it was a no-brainer.”

With Milledge’s pro career in the USA plummeting, playing in Japan and packaging it as a reality show is seen as a win-win for both the ballplayer and the Nippon Baseball League, which has been struggling with attendance.

“This is a great opportunity for the people of Japan to watch a five-tool superstar, a profit-making machine for the league, while also serving as a platform for Lastings’ transition from baseball player to screen star – something we all new was inevitable from the day he stepped on the field in New York and instantly won the hearts of Mets fans,” said Shetter.

Which lucky NPB team gets Milledge is as yet undetermined, but be sure to check here, Patrick Newman’s outstanding NPB Tracker, and Access Tokyo for the latest on Lastings.