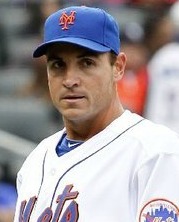 For those who can remember that far back, Chris Young was the key “low-risk, high-reward” signing the thrifty Mets made last winter. Oodles of beat writers, bloggers, and fans couldn’t praise the move enough. After all, when healthy, Chris Young was an outstanding pitcher — a legitimate #2 starter on a championship club. Young would top a rotation that included the surprising R.A. Dickey, the improving Mike Pelfrey, and the poised-for-breakout-season Jonathon Niese. Further, that formidable foursome would be led by superstar Johan Santana, who was sure to be joining the team by June — or the All-Star Break, at the latest.

That dream went down the drain in early May, when it was clear Chris Young would not stay healthy any longer than it took milk to turn sour. Oh, sure, Young was very good — great, in fact — but only through four starts and 24 innings.

You can say that it was a managed-risk gamble, and the fact they got anything at all out of Young was worth that risk. I’m not sure I agree, because once Young made it through training and appeared healthy, he became an integral part of the Mets’ plan — a plan that was also predicated on the expected return of Johan Santana. Just curious: does that kind of planning — relying on hopes and wishes specifically — remind you of anything? Hmm … maybe the same strategy employed by the last front office regime? The more things change, the more they stay the same; the only difference was that last winter, the strategy was celebrated because the Mets spent less money. And as a fan, that’s exactly what I want to see: my team spending less money to lose, right?

Anyway … not much to say about Young’s abbreviated season. He accomplished what was predicted here, and provided Mets fans a very brief, but fun, period of optimism. One bright side: by going down, Young opened up an opportunity for Dillon Gee, who took full advantage.

Chris Young expressed interest in re-signing with the Mets, but I doubt the cash-strapped team will pay him to rehab. Young will not be ready to pitch in MLB in 2012, and whether he can return in 2013 — by which time, he’ll be 34 years old — is questionable. Complicating his return is the fact his horrendous pitching mechanics directly contributed to his shoulder injury. Chances are, Young won’t adjust his mechanics, so once he resumes throwing, he’ll continue to aggravate the parts of his shoulder that were surgically repaired. And/or, he’ll return for a short while, then re-injure his shoulder. No matter which way you look at it, Chris Young’s future as a Major League pitcher is dim.