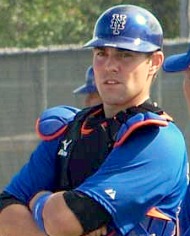 It took Mike Nickeas a long time to reach MLB, but when he finally did, he proved capable if unspectacular.

The Canadian-born catcher spent seven years in the minors before grabbing a cup of coffee with the Mets in September 2010. Thanks to visa problems, injuries, and the end of a drug suspension for Ronny Paulino, Nickeas was able to parlay that coffee klatch into a spot on the Opening Day 25-man roster in 2011.

But it wasn’t all because of Paulino’s problems that Nickeas made the big club; the career minor leaguer proved to be a reliable and solid “catch and throw guy” who seemed to have a strong rapport with the Mets pitching staff.

Nickeas was sent to AAA after Paulino finally joined the Mets, and didn’t return until August. While serving as a backup in both Buffalo and Flushing, Nickeas showed very little offensively, but definitely established himself as a fine handler of pitchers and displayed above-average defensive skills. From the perspective of a professional catching instructor, I don’t love his technique, but he gets the job done better than most and he appears to be the catcher that every Mets pitcher wants to throw to — a factor difficult to quantify, but trust me, is a huge asset. Nickeas was no Charlie O’Brien back there, but he was a huge upgrade over Josh Thole and a few ticks better than Paulino. Unfortunately it wasn’t enough defense to overcome his meager offense; his dramatic homer in game 19 was the highlight and peak of his season.

As much as I like Mike Nickeas, I was completely stunned that the Mets included him on the offseason 40-man roster; did they really think that another team would jump at the chance to pick a 29-year-old, .180-hitting, third-string catcher in the Rule 5 Draft? Seems to me to be a waste of a roster spot, since there are at least two dozen catchers exactly like him throughout AAA. That’s not to say I’m upset; in fact, I’m pleased to know that Nickeas is likely to be in Port St. Lucie come February, and presumably part of the organization’s catching depth in 2012. My guess is he’ll be exactly what he was in ’11: a defensive-minded, backup backstop who can be shuffled between AAA and the bigs as necessary. And within the next 3-5 years, we may see Nickeas move into a minor-league managing post — perhaps in preparation toward a more successful MLB career.