As Goes Johan, So Will Mets 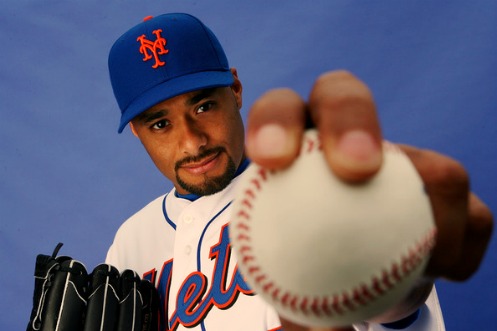 Remember when the theory was that the Mets would go as far as Jose Reyes would take them? I.e., “as goes Reyes, so goes the Mets.” The thought was that Reyes was the key to the Mets success, and there may have been some stats that kinda, sorta, backed it up.

Fast-forward to the After Reyes period in Mets history, and Ron Darling‘s quote prior to yesterday’s spring training contest:

There’s no team in Major League Baseball that looks to one player — especially a starting pitcher — more than the New York Mets. Johan Santana is everything to this team …

Ronnie may have something there. The only other teams that immediately come to mind who are incredibly dependent on one starting pitcher (or any one individual) are the Tigers (Justin Verlander) and the Marlins (Josh Johnson). The Tigers, though, have a pretty decent supporting cast, including a couple of other-worldly sluggers named Miguel Cabrera and Prince Fielder. The Fish might be a closer match, since their 2011 season went kaput in a hurry after Johnson went down. But rather than argue what player is most important to a team, let’s look at this in our Flushing vacuum: is it true that everything for the Mets in 2012 depends on what Johan Santana does — or doesn’t — do?

It’s an interesting question. Many would agree that Santana can win the Cy Young and it won’t help the Mets finish higher than fourth in the NL East. At the same time, if Santana can’t give the Mets at least 20-25 starts, last place is more or less a guarantee.

Perhaps more behind the argument of Johan’s importance is his value as the “meal ticket”. We don’t hear that term much any more but old schoolers know it means an ace pitcher who “puts fannies in the seats.” That fits, no? We know the odds are against the Mets making a postseason run, but that doesn’t necessarily mean they can’t make money. And I believe that the club’s 2012 profitability is directly tied to Santana’s presence — and to a lesser degree, his performance. Because as long as the casual fan — i.e., NOT the one who, like you, reads Mets blogs on a daily basis — sees or hears about Santana pitching every fifth day, then there is hope that the Mets can be OK, there is belief that the Mets are relevant, and there is a reason to make a family trip to Citi Field and buy a Santana jersey.

David Wright also provides this “feelgood” perception for casual fans, but I wonder if it’s to the degree of Santana? Or is it more? Beyond those two, I don’t know who else on the Mets has truly universal impact. Again, you have to try to put yourself in the shoes of the average Mets fan — and that’s not you. It’s the guy, for example, who works at the concierge desk, is a “diehard” Mets fan, yet has no idea who R.A. Dickey is. It’s the mother of three who wears a David Wright jersey to match the ones of her kids when they make the trip to Citi Field three times a year, yet thinks Ike Davis is an R&B singer from the 1970s. That’s the part of the fan base that ultimately drives the profits for the New York Mets.

If Johan Santana can stay healthy and pitch on Opening Day, it will be good news and big news — the kind reported during the 22 minutes that 1010 WINS gives you the world. Santana’s presence keeps the Mets relevant. His success breeds hope, and diverts attention from the financial and legal troubles of ownership. Conversely, his absence could cause the Mets to fade quickly from public consciousness — or put the focus back on the negative.

The Mets know this, Santana himself knows this, and that may be dangerous to Johan’s health. He knows how important he is to the franchise’s success or failure, particularly now with ownership’s dire financial troubles. He also knows he’s being paid an astonishing amount of money that hasn’t provided an acceptable ROI. Could these two factors, added to Johan’s pride and sheer love for competition, cloud his mind during his comeback? Is it possible that he’s feeling pain but not talking about it, and/or, might he push himself too far to make that Opening Day start?

Based on what has been reported about Johan’s personality and drive, you have to at least consider the possibility he’ll put the weight of the franchise on his damaged shoulder. He seems the type to accept responsibility, and take ownership of it even if it’s beyond his scope.

What do you think? Is Johan Santana the Mets’ “meal ticket?” If so, is that factor weighing on his mind, and perhaps influencing how he executes his comeback? Post your thoughts in the comments.