The Mets and Marlins faced off for the third time this spring and once again the Fish kept their secret weapon hidden from view.

As you probably know, the Miami Marlins spent a bundle of money on a superstar shortstop this past winter. However, they have yet to allow the Mets to see this wunderkind. My guess is they want to keep him a secret until the regular season, when the games count, to prevent him from being overexposed. It’s a good strategy, as the Mets won’t know how good this shortstop is until after Opening Day.

Though, if the Mets knew how good this shortstop was, they likely wouldn’t have let him leave New York. Right?

Johan Santana pitched 2 2/3 innings and allowed only one earned run. I’m sure there are many people encouraged, perhaps even excited about this news. Further, I’m sure there are people happy to find out that Johan hit 90 MPH on the radar gun — a gun that Dan Warthen claims is ” reading a few MPH slow.” Yeah, right, Dan.

However, I was not overly pleased with Johan’s outing, because I’m not looking at the results, but rather, the process. And the process remains flawed. His arm action is not using the shoulder fully — I’m not sure whether it’s because he’s trying to protect the shoulder (due to pain or fear) or if it’s the same bad habit that caused his injury in the first place, but regardless, it’s not a good thing. On most of his pitches, his throwing hand is lagging behind his body and he’s leading with his elbow, which in turn causes over-flexion of the elbow. He’s either feeling pain in the shoulder or it’s tight, because he’s not getting enough external rotation with it. As a result he looks like he’s pushing the ball, or throwing darts (it’s also why he’s missing high, above the strike zone). Additionally, he’s intentionally trying to get a higher release point — perhaps to “fix” that leading elbow (what he should be doing instead is working on rotating the shoulder). The release point, however, is so high that it’s going to result in shoulder (supraspinatus) impingement. Ironically, the high release (i.e., elbow is higher than shoulder), combined with the over-flexion of the elbow creates tightness around the shoulder and it limits external rotation. In other words, one big bad cycle that points back to the injury that sent him to surgeon in the first place. Bottom line is that unless / until he fixes this issue, Johan is unlikely to get much more velocity but is likely to re-injure his shoulder — and/or, snap something in his elbow.

Josh Satin has a nice-looking swing when he stays within himself and under control. But when he “gets big” — i.e., tries to crush the ball by using his upper-body too much — his head pulls out and he tends to swing and miss. And for whatever reason, he seems to be trying to “get big” too often. Maybe someone told him he needs to hit with more power?

Speaking of power, Adam Loewen has a monster swing, but it doesn’t look like he can hit anything above his waist. Until pitchers figure that out, he could hit many mistakes over fences.

Josh Thole may have zero power, but if he keeps getting those little Tony Gwynn / Rod Carew -like knocks over shortstop with runners in scoring position, he could hit enough to be an everyday catcher.

The new Miami Marlins uniforms are as ugly as advertised. Even my wife wanted to know just what the heck they were thinking in designing that fashion disaster. It’s bad enough someone came up with that design, but what’s worse is someone else approved it. 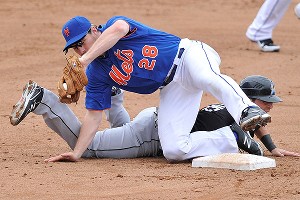 Daniel Murphy seems fine fielding routine grounders but his footwork is still frightening. There was a situation in Sunday’s game that could’ve turned ugly — see the photo at left where he was blocking the bag with his leg. A similar setup is what ended his 2011 season.

Jason Bay finally earned his first hit of the spring — he beat out an infield grounder. Not exactly what you want to see from a slugger but it’s good he got off the schneid. And you have to love his hustle.

Mark Buehrle is fun to watch and will be fun to watch this summer. How can you not like a guy throwing 82 MPH, mixing in a so-so curveball, and getting out Major League hitters? Crafty, controlled, efficient. I wish all pitchers worked at his quick pace.

Don’t look now but Ronny Cedeno has 4 walks in 14 plate appearances, sporting a .429 OBP. I know, small sample size, but it does suggest that he’s heeding the wisdom (demands?) of Terry Collins and Dave Hudgens, who want to see the historical free-swinger take more pitches.

That’s all for now. Please post what struck you in Sunday’s contest in the comments.