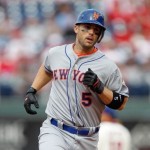 Who needs a pinkie, anyway?

I’m not going to say this is a big series for the Mets.

Starting tonight, our favorite team from Flushing goes to the Ted in Atlanta for a three game series.  This is not an important series. After all, it’s crazy to say a mid-April series is meaningful.  But it is a barometer – a way to get a feel for just who this Mets team is early in 2012.

They’ve started 6-3.  They’ve swept the Braves already in New York.  But now, the Braves are on a roll, having won five straight.  The Mets have played .500 ball in that time.  New York did take 2 out of 3 from the Phillies in Philadelphia, which is always a good thing.  But they faced a depleted lineup.  Was the starting pitching that good over the weekend, or was the Phillies’ lineup that bad, sans Chase Utley and Ryan Howard?

The Mets have David Wright back, and he raked all weekend against the Phils.  Yet another Met, Jason Bay, came down with jammedfingeritis, and missed Sunday’s game.  I think I can speak for all Mets fans when I say, “meh.”  Is he really that much of an improvement over Scott Hairston at this point?

Lucas Duda and Ike Davis showed improvement over the weekend, and while they are still not exactly white hot, production from the two young power hitters will be helpful against the Braves, and the rest of the league.  How will they, and the rest of the lineup fare the second time around against Tommy Hanson, Randall Delgado, and Jair Jurrjens?

It will be more interesting to see how Dillon Gee, R.A. Dickey, and Johan Santana perform against the Braves lineup, which has scored 31 runs during their winning streak.

It’s not at all like this series means anything right now.  But we’ve seen a Mets team, during the earliest of the early part of the season, that has enjoyed some tenuous success.  Facing a hot Braves team will tell us more about who the 2012 Mets are capable of becoming – a surprising come-out-of-nowhere group of world-shockers, or the dismal pile of mediocrity in blue and orange that everyone expected.

But then again, it’s early.

Back Mets Game 9: Loss to Phillies
Next Mets Game 10: Win Over Braves