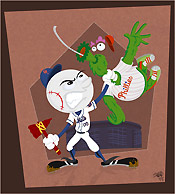 The Phillies and their phans have all but given up on the NL East title — all sights are now pointing toward the wild card. As it stands today, they’re only two games behind the San Diego Padres in that race — though the Dodgers are a hot breath on their neck, and both Colorado and the Brewers still in the hunt. That said, this series is huge for the Phillies as they attempt to control their destiny.

Meantime, the Mets really only need to win one game this weekend. They’re ahead of the Phils by six and a half games, and losing two only reduces the lead by one game while plummeting the magic number to single digits. The last thing the Mets want is to be swept, because then the Phillies are close enough to have an outside chance of taking the East. If the Mets win at least two, the only way they’d not earn the NL East crown is if the ghost of Gene Mauch overtakes Willie Randolph’s soul. (Though, if the Mets didn’t make the postseason, an exorcism might be pretty cool to see as an alternative — as long as FOX didn’t carry it with Joe Buck and Tim McCarver commentating.)

By the pitching matchup, you’d assume it was Oldtimers’ Day, and wonder if Ed Kranepool will be suiting up to play first base. In actuality, it’s Dog Day at Shea, in addition to being SNY Mustache day (not sure if the first 25,000 fans will get a Tootsie Pop with their mustache). All the excitement of barking hounds and fake mustaches might overshadow the contest, or possibly wear out the starting pitchers prematurely. Hopefully Tommy will take his Geritol and find a way to beat the Phils. BTW, I’ll be seated in the Loge Section 20 if you want to come by and share a pretzel.

We saw that Pedro was healthy enough to pitch in his first game back. In his second start, we saw he could pitch effectively with five days of rest. The next test is to see if Pedro’s array of variable speed slop can confuse some of the best hitters in the National League. In essence, it is a warmup for the World Series, as the Phillies have about as close to an AL lineup you’re going to see. Let’s not get ahead of ourselves, though.

Lohse has a 8-12 record and 4.47 ERA, but cannot be taken lightly. He’s sort of like Oliver Perez in 2006 — sometimes he’s absolutely filthy, other times he’s knocked out by the fourth inning. If his good deuce is working, he can dominate. Against the Mets so far this year, it hasn’t been, and he was hit hard. Let’s keep that track record going, Kyle.

After seeing Ollie’s lights-out start against the Braves — which Carlos Beltran called the best he’s pitched as a Met — what can he do for an encore? Perez may be pitching for the postseason rotation, and after John Maine’s matching performance a few days ago, he’ll be amped to keep the bar raised. It took five and a half months, but Ollie FINALLY understands that he must stick to one arm angle. Now let’s see if he can do it for two starts in a row.

Adam Eaton has been one of the NL’s worst starters all year, yet the Mets make him look like the second coming of Tom Seaver. The only reason his 6.31 ERA is that low is because he’s held the Mets to a 2.89 ERA — and that’s from three games. Maybe the fourth time will be a charm; the Mets hitters certainly can’t be surprised by his offerings at this point.

I’m fairly confident the Mets can pull out at least one of these games. If Eaton didn’t resemble human kryptonite, the Sunday matchup would look like a no-brainer for Oliver Perez. The most important game may be the second, in that we’ll see what Pedro can do against a very good hitting club. In any case, I personally hope it is the last time in 2007 we hear Jimmy Rollins’ mouth, see Chase Utley’s grin, and smell Ryan Howard’s breath.

The image accompanying this post was drawn by Sal Iovine, a local artist and diehard Mets fan from Staten Island. Sal was kind enough to allow MetsToday to use the image, which I find both appropriate and hysterical — hope you enjoy it too. Make sure you check out his website IOBLOG as he has plenty of other interesting drawings and plans to do more Mr. Met renditions in the future. According to Sal, “my goal is to reach out to the greatest fans in the world, the New York Mets fans.”

Thanks for making us laugh, Sal!

Back Number Eleven
Next Q & A: Phillies