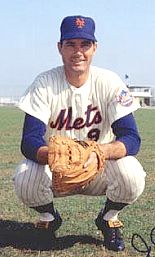 With the Mets’ magic number whittled to nine, I had a hard time finding an appropriate Met to honor — mostly because I always hated the best candidate, Todd Hundley. (Hey, it’s my blog, and if I don’t want to honor a brash and boozing malcontent who smoked cigarettes in the dugout and DIDN’T play on the ’86 Mets, I have that right.)

After Hundley, the pickings are slim. Todd Zeile wore number 9 for a while, but not long enough to be honored with it, and many remember him as #27 (my rules are vague and illogical, and kind of like the whiffle ball rules at your friend’s house — I make them up as I go along). Ty Wigginton would be a no-brainer if he’d played more than two years with the club. Gregg Jefferies wore number nine, and I hated him less than Hundley, but there was so much negativity surrounding him after so much hoopla, it didn’t feel right. Then there’s Joe Torre … can you imagine if I honored the Yankee manager on a Mets blog — even if he was adorned in orange and blue?

The best of the rest are the forgettable Jerry Martin, Ronn Reynolds, Jim Hickman (who wore at least two other numbers, if I recall correctly) and Mark Bradley. I finally settled on the little-used caddy to Jerry Grote, backup catcher J.C. Martin — for no other reason than the “interference incident” that won Game Four of the 1969 World Series.

It was the tenth inning, all tied, and Grote led off the inning with a double off Oriole reliever Pete Richert. Rod Gaspar was sent in to pinch-run and pitcher Tom Seaver was due up. Manager Gil Hodges called Seaver back and replaced him with Martin (who would be catching for Grote if the inning didn’t end) to bunt Gaspar to third. Martin bunted back toward the mound, and Richert picked it up and threw to first. Martin, however, was running a few feet inside the baseline and the ball ricocheted off his arm and into rightfield, allowing Gaspar to score and the Mets to go up 3-1 in the Series. Baltimore manager Earl Weaver argued that Martin was illegally inside the baseline to no avail — umpire Shag Crawford ruled that Martin had not intentionally deflected the ball and the play stood.

Other than that moment in Mets history, Martin’s career was relatively nondescript — a journeyman bench player who spent 14 big-league seasons filling in behind the plate and at the infield corners. He did earn the dubious achievement of 33 passed balls in 1965 (an MLB record held until 1987), but not because he had awful hands — rather, he was the designated catcher for knuckleballers Hoyt Wilhelm and Eddie Fisher.

Joseph Clifton Martin finished his career in 1972 with a .222 career batting average in 908 MLB games.