Belated Book Review: Wherever I Wind Up 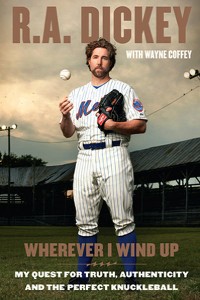 Wherever I Wind Up by R.A. Dickey (with Wayne Coffey) is a book that could have been written by anyone in any walk of life.

Being a pitcher is his profession, and he’s good at it.  But like anyone else, he didn’t roll out of bed throwing 80 MPH knuckleballs for strikes.  Nor did he become a principled family man overnight.  Wherever I Wind Up is about the journey we all take throughout our time on Earth.

The best sports autobiographies reveal the author as a relatable human being, and are brutally honest (qualities that can be hard to find in an autobiography).  From page one, the reader can relate to Dickey on a human level.  As for honesty, Dickey talks about everything, as if he were talking to his therapist.  In fact, he started writing this book in the mid-2000s – about the same time he began his therapy.  As such, the book often reads like a therapy session, but never loses its gripping narrative style.

He came from a broken and dysfunctional home where the grownups were often drinking, fighting, or both.  He revealed a shocking episode of childhood sexual abuse, then another that was even worse, not long after.  These early episodes sent him reeling through his early teen years.

In middle school, he seemed to always seek out fights with other kids, and he found his share of them.  On occasion, he would find an abandoned home to break into, just to spend the night there.   His mother fell deeper into alcoholism, and Dickey decided to leave her and move in with his father at age 13, a decision he would wrestle with into adulthood.  As he said, he craved structure, and he wasn’t getting it at home.

He finally found the structure he needed in high school, at Montgomery Bell Academy (MBA).  At MBA, he was lucky (or blessed) to make friends with the right people.  He found religion and became a born-again Christian.

These days, most religions are disparaged, and often justifiably.  But those who choose religion for all the wrong reasons, and those who use religion to justify malevolent acts, are the few extremists who taint those who are benefitted by it, and those who use it to benefit those around them.  R.A. Dickey is a perfect example of someone whose life turned around thanks to religion.  He used religion not as a “genie in a bottle,” as he put it (“Please let me strike out Pujols 5 times tonight”), but as a source of strength, and a moral compass when making key decisions.  He never said it made him perfect.

And, as his book chronicles, R.A. was far from perfect.  He writes about his marital issues, and his inability to control his anger.  Incidentally, Dickey’s temper must not be unusual among pitchers.  In Ron Darling’s book, The Complete Game, he wrote indirectly about his temper, which was a controlled aggression he took to the mound.  Dickey needed the structure of his religion, and a lifetime of practice, to help him control his anger.

Dickey’s bumpy journey through life mirrored his bumpy journey through baseball.  Originally a hard-throwing, highly ranked prospect with the University of Tennessee, he was drafted by the Texas Rangers.  During his physical, it was discovered he had no Ulnar Collateral Ligament (UCL) in his throwing elbow.  As a result, the Rangers rescinded their $800K+ offer to him.  From that point on, Dickey had to scratch and claw for everything he earned in professional baseball.

As his velocity diminished, Rangers’ manager Buck Showalter and pitching coach Orel Hershiser convinced him to throw a knuckleball, a pitch he had been experimenting with, full time.  It took years to perfect, and R.A. would probably tell you he’s still trying to master it, despite his success.

He took advice from people like Charlie Hough, Phil Niekro, and even Tim Wakefield, who was an active pitcher at the time.  Knuckleballers belong to a special fraternity, and seem willing to help each other out.

The hardest chapter to read is called “The Bottom.”  Dickey’s knuckleball experiment was failing miserably in the minors, his marriage was on the rocks, and he was becoming estranged from his family.  He started to have thoughts of suicide, and engaged in self-destructive behavior, like trying to swim across the Missouri river (he nearly drowned).  Most people go through a point in time like this in their lives.  For anyone who has, R.A.’s description of everything that went on in his mind will surely ring true.

His incident in the river, and decision to go into therapy worked to pull him out of this dark period of his life.  And, as he said, it was probably not a coincidence that the more he opened up about his problems, the better he pitched.

And R.A. was very open in his book.  About everything.  Wherever I Wind Up not only gives the reader an insightful and personal look into the life of the average professional baseball player, but a look into the evolving life of an average human being.

Tags: Dickey, mets, Review, Wherever I Wind Up