For the first time all year, R.A. Dickey didn’t have it. He was spinning the knuckleball — a pitch that isn’t supposed to spin. Why was it spinning on this night, of all nights? I think I have an idea, and it is illustrated below: 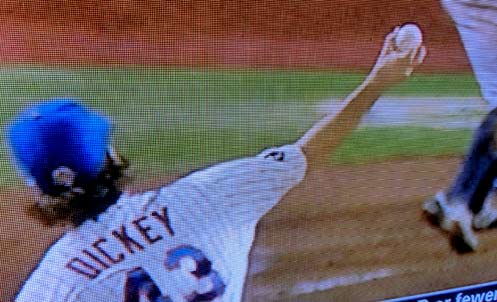 I illegally snapped a photo of my TV screen to show you the issue. What do you see? Check out the arm angle, the elbow height, and most importantly, the angle of the hand. This is a split second prior to release. See how his thumb knuckle is pointing to the sky? Not good. Where R.A. needs to be there is more overhand, with his index and middle finger knuckles pointing to the sky. With those two knuckles sliding off to the side of the ball, his ring finger applies pressure to the ball as his arm swerves across his body. That pressure is very slight but it’s enough to cause the ball to spin a full rotation or more on its journey to home plate. When the ball rotates that fully, it tends to travel on a straight path and doesn’t sink nearly as much as it would if there was little or no spin.

Why was R.A. releasing like this? My guess is fatigue. Usually his arm angle is higher, with his elbow at or above shoulder level on release. In this game he had a more three-quarter release, with the elbow at or below the shoulder. Very generally speaking, a dropped arm angle is a symptom of tiredness / fatigue in the shoulder muscles. There is this illogical myth that knuckleball pitchers can throw every day and don’t get tired because they don’t throw as hard as conventional pitchers. But the truth is that’s nonsense — the knuckleballer is still putting his body and arm through the same activity as any other pitcher. In R.A.’s case, it’s even more true because of the 80-85 MPH velocity with which he throws a knuckleball. R.A. was a little tired, it resulted in a lowered arm angle, causing the fingers to slide to the side of the ball, and in the end the knuckleball often had a bit more spin than Dickey would have liked.

Off the mound, you have to love R.A. rapping an opposite-field single and later scoring on a play where he crashed into the catcher — showing zero fear. Now THAT’S a ballplayer, and a super example of why the DH should be outlawed.

Nice to see Ruben Tejada back in the lineup and spraying the ball.

Frankie Francisco is out until further notice with an injury to his side.

The Mets begin a three-game series in Chicago against the Cubs beginning on Monday night at 8:05 p.m. EST. Johan Santana takes the hill against Travis Wood.