The number ten has been on the back of players as diverse as Duffy Dyer, Ken Henderson, Kelvin Chapman, Butch Huskey, David Segui, Jeff Duncan, Joe Hietpas, Rey Sanchez, and Shingo Takatsu — among others. Today, of course, it’s worn by “Legendary” Endy Chavez. 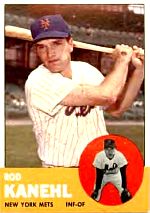 But our “magic” posts honor only Mets heroes from the past, so Endy isn’t eligible. I had to give at least some consideration to (shudder) Rey Ordonez, but decided that a.) his bad times outweighed the good times; and b.) his inability to decide between #10 and #0 throughout his career had to be held against him (who would ever WANT to be a zero?). That said, it came down to “Hot” Rod Kanehl and Rusty Staub. Rusty would have won in a landslide, but his most memorable Mets years came while wearing #4 — specifically, in 1973. And hopefully we’ll get down to that number and honor Rusty at that time.

Roderick Edwin Kanehl was an original Met, and one of the first fan favorites adorning the orange and blue. He scored the winning run in the Mets’ first home victory at the Polo Grounds, and hit the first grand-slam in Mets history (also at the Polo Grounds) on July 6, 1962. But he wasn’t known for his power — he hit a grand total of 6 homers in 796 career MLB at-bats. Kanehl was a career minor leaguer, a journeyman who didn’t have any one particular skill that could be graded as “Major League”. However, his all-out hustle and lack of fear when it came to outfield walls endeared him to the hometown fans — and won him a job on the Mets’ bench. In his three-year career with the Mets, Kanehl played every position on the field other than pitcher and catcher for manager Casey Stengel, and never left a game without dirt on his uniform. Stengel loved Kanehl’s enthusiasm, team-first attitude, and determination, and had to fight with GM George Weiss to keep the light-hitting utilityman on the roster.

As told by Leonard Shecter in “Once Upon the Polo Grounds,” Stengel had related the following debate concerning Kanehl: “Weiss says, ‘I ain’t seen him do anything in the field.’ So I said, ‘You’re full of baloney, he can run the bases.’ ”

Kanehl paid back the loyalty in 1975, when he was the only former Met to attend Stengel’s funeral.

Back Mets Game 151: Win Over Nationals
Next Number Nine