What To Do with Duda 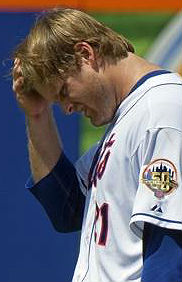 At the moment, Lucas Duda is nursing a hamstring strain, and may or may not be headed to the DL. Can a hamstring injury prevent a player from recognizing sliders in the dirt?

Joking, of course. But after nearly 800 plate appearances, we have only a vague idea of Duda’s true potential. Based on the information we have on him, what should the Mets do with Lucas Duda?

We have seen Duda hit mammoth homeruns. We’ve seen him show patience and discipline at the plate, and hit the other way. We’ve seen him hit over .300 for an extended period, and we’ve seen him fill the middle of the order as a legitimate run producer / RBI man.

However, we’ve also seen the bad side — the Duda who is overmatched by marginal lefthanded pitchers who can spin a slider into the dirt. The Duda who is unsure of himself and tentative at the plate, letting good pitches go by. The Duda who makes every fly ball an adventure.

At times, Lucas Duda has looked like he might be the next Adam Dunn, a homerun / walk / on-base machine — except, minus the strikeouts. More recently, he’s looked like he might be the next Gary Rajsich — a powerfully built young man who looks like he’s going to crush the ball, but for some mysterious reason, just can’t seem to make enough contact to fulfill the promise.

Actually, Rajsich is too far a stretch; Duda has already far exceeded the best Rajsich ever accomplished at the big-league level. Maybe Pat Putnam is a better comp. For those too young to remember, Putnam came up with the Texas Rangers as a 25-year-old in 1979 and hit 18 HR with a .277 AVG in 139 games. He looked like he had the potential to be a serious slugger who could hit tape-measure homers — maybe even an All-Star. Do you remember Putnam? If you’re too young, have you ever heard of him before? Likely not, and there’s a reason — he spent 8 years as a platoon / backup first baseman, totaling 63 career homers and a .255 AVG. Is that Duda’s fate? Who knows?

At this point in time, I don’t think the Mets have much choice but to play Lucas Duda every day to find out his ceiling. Looking at his current stat line, it’s doubtful the Mets would get much for him in a trade; he’d have to be part of a larger package to get significant return. Does it make sense to give up on him now, to obtain, say, a late-inning reliever that may or may not help the Mets make a run at the Wild Card? I’m not sure it’s worth it. Duda will turn 27 next February, and that’s generally the age that players begin their peak. Consider that, plus the fact that some power hitters take a little longer to develop; Carlos Pena, Nelson Cruz, and Jose Bautista are three that immediately come to mind. I’m not suggesting that Duda is going to become a 40-HR guy, just that it’s not unusual for sluggers to bloom in their late 20s. That said, I think it’s possible for Duda to become a bonafide run producer.

However, I don’t know if it’s possible for Duda to develop into an outfielder who plays acceptable defense. I haven’t seen enough of him at 1B to pass judgment there, so in my mind, his future is as a DH. That’s a problem considering he plays for a National League club. Duda has to be an absolute beast — on the level of a Dunn, Cruz, or Bautista — in order to justify an outfield role.

So what to do with Duda? First off, get him out of RF and move him to left, where hopefully his defensive misadventures will be slightly less damaging. Play him every day, against lefties and righties, and see what happens. There aren’t any MLB-ready, power-hitting outfielders in the system currently, so it’s not as if Duda is blocking anyone. Send him out there, expose him to everything, and hope he figures out how to release the beast within. By the end of this season, the Mets should have a better idea of where Duda is going with his career and act accordingly. Maybe his bat comes around and they have a trading chip to offer to AL clubs. Maybe his defense improves and he’s the 2013 left fielder. Or maybe he continues to regress, in which case, the Mets know to move on (Cory Vaughn? Wilmer Flores?).

Now, if you are of the belief that this 2012 Mets team can go to the postseason, then the best course of action is to put Duda into a platoon situation with either Jason Bay or Scott Hairston, limit his time in the field, and hope he gets hot enough to overwhelm his defensive miscues. And/or, hope he gets really hot, really quick, and then flip him to another club for bullpen help. Though, my guess is that if he’s that hot, you won’t want to see him exit.

Quite a conundrum, no?

What do you think? What should the Mets do with Lucas Duda? What CAN they do? Post your opinion, and detail your argument.

Back Mets Game 89: Loss to Braves
Next Matt Harvey Tunes Up in Buffalo