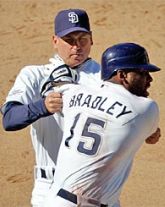 No doubt you heard about the latest games being played by Milton Bradley. As if it weren’t bad enough that his team was being wiped out of the Wild Card by being swept at home at the hands of the Colorado Rockies, and as if it weren’t bad enough his big feet knocked teammate Mike Cameron out of the game, Milton Bradley had to have a meltdown with an umpire, get kicked out of a game, likely suspended, and in the process injured his knee while being wrestled to the ground by his manager Bud Black.

But that’s not all. In this latest episode in the drama that is Bradley’s life gets even nuttier — his manager, his first-base coach, and the Padres General Manager are all blaming umpire Mike Winters for the incident.

The situation as reported by the North County Times (I’ve taken the liberty to bold some of the more questionable details):

The incident started in the fifth inning when Bradley was called out on strikes by home-plate umpire Brian Runge. Runge told The Associated Press that Bradley “flipped the bat right in front of me, about 5-10 feet from me.”

When Bradley came to bat in the eighth, Runge questioned Bradley about the bat toss.

“I asked him if he had thrown the bat at me the time before,” Runge said. “He said ‘No.’ I told him I didn’t think he did.

“(Bradley) said, ‘Did (Winters) tell you that I threw at you?’ (Bradley) started to point at Mike.

When Bradley reached first base after lining a single to center, he confronted Winters.

“I asked the first-base umpire if he said I had thrown my bat, and he said he did,” Bradley said. “I asked him why, and he started yapping at me.

“Then someone in the crowd yelled ‘You suck’ to the umpire, and I pointed at him (the fan).

“That’s when (Winters) called me a (multiple-word expletive). He kept talking. Meacham was right there. It was ludicrous.

“I went after (Winters), but I didn’t want to hurt him. The crowd was loud by this point, so I went up to him so he could hear me.

“He should be reprimanded for this.”

After the game, the mild-mannered Meacham was as upset with Winters as Bradley.

“In 26 years in the game, I can honestly say that was the most disconcerting conversation I’ve heard between an umpire and player,” Meacham said. “It was so bizarre.

“I can’t tell you the umpire’s exact words, but it was something like ‘You play, and I’ll umpire.’ It was like he was trying to agitate Milton.

“But I can tell you, Winters absolutely used foul language. The way he spoke to Milton was so angry and vindictive.

“It got to the boiling point when he called Milton a name. That’s when I stepped on the field. His tone was so angry and ridiculous. It smacked of racism.

“Milton did a great job of holding it together.”

Meacham said that when the umpires got together to discuss the situation “Winters lied” about what happened.

“Todd Helton (the Rockies’ first baseman) is the only one not involved who knows what happened,” Meacham said.

Tracked down in the family room deep in the bowels of Petco Park, Helton was cautious.

“I know I’m the impartial third party here, but I don’t want to get in the middle of it,” Helton said. “Let’s just say, it was a very interesting situation.”

Bruce Froemming the second-base umpire Sunday and the crew chief, who is retiring after 37 years in the game and was honored by the Padres before the game, refused to make Winters available to the media.

“(Bradley) got grumpy with Mike Winters,” Froemming said. “He has been around a long time. Winters told him to knock it off, and he continued it.

“There is no covering up what (Bradley) did. He had to be physically restrained. We’re not going to put up with it.

The same incident, from another point of view; this from the Press-Enterprise:

“I have never hurt nobody,” he said. “When does the harping on me stop? All I do is go out there and try to play baseball hard. I think I’ve done everything in my power to do things the right way.

“He’s going to file a report. If he tries to say that I did anything wrong whatsoever, it’s completely ludicrous. Now because of him, my knee’s hurt. If he costs me my season because of that, he needs to be reprimanded.

“I’m going to take some action. I’m not going to stand pat and accept this because I didn’t do anything wrong,” Bradley said.

Padres CEO Sandy Alderson used to work in the commissioner’s office, where one of his duties was overseeing umpires.

“We’re not going to sit by and see an umpire bait a player,” Alderson said. He added that if the commissioner’s office concludes the situation was handled appropriately, “I’ll be shocked.”

“They way he responded was so bizarre,” Meacham said of Winters. “I can’t tell you exactly the words he said, but it was like ‘Hey you just play baseball and I’ll umpire.’ It was almost like he wanted to agitate Milton.”

“I was just appalled. That’s why the game stopped,” Meacham said. “I couldn’t believe what I was hearing.”

Meacham said the language was not racial, but “the whole tone angered me so much, like I’ve never been angered in 26 years (of baseball). It was ridiculous and unfair.”

Bradley had to be helped off the field. He was to be examined Sunday night and was expected to join the team today in San Francisco.

Black wouldn’t discuss what he said to the umpires.

“We’re trying to win ballgames and when guys are passionate about their play sometimes you see arguments and you see passion shown on the field,” Black said.

Here’s one more, from SignOnSanDiego:

Then, shortly after Bradley arrived at first base via a single, he and Winters were exchanging barbs that, according to Padres first-base coach Bobby Meacham, were inflammatory on the umpire’s part.

Said Meacham: â€œIn my 26 years of baseball, that was the most disconcerting conversation I have heard from an umpire to a player. The way Winters responded was bizarre. It was almost like he wanted to agitate the situation.

â€œI was appalled. That’s why the game stopped.â€

Meacham moved toward the foul line and turned toward Winters from the distance of about 10 feet.

â€œI couldn’t believe what I was hearing,â€ said Meacham. â€œMilton did not use foul language. The umpire, absolutely. He called Milton a name (apparently after Bradley had pointed in the direction of a fan who was booing Winters). That’s when I stepped on the field and said, ‘You cannot do that.’

â€œEven before that, I was saying this is wrong, this is ridiculous. The name that Winters called Milton, had he said it to me, I would have rushed him. No one is going to take that.â€

Asked whether what Winters said had racial overtones, Meacham, who, like Bradley, is black, replied, â€œIt smacked of that tone.â€

Maybe I’m crazy, but it appears to me that the San Diego Padres’ management has gotten sucked into Milton Bradley’s warped sense of reality. They appear to agree that Bradley was “baited” by the umpire. Apparently, throwing a bat in the vicinity of the home plate umpire after striking out is “OK”. Apparently, mouthing off about the issue two innings later to the first base umpire is also “OK”. Apparently, listening to the fans in the stands rather than focusing on the game is “OK”. And apparently, completely losing your cool to run after an umpire is “OK” as well (as long as you “don’t want to hurt him”, but merely want to make sure he can hear you).

It’s amazing how a player’s batting average and homerun prowess can turn an entire organization’s morals go off the deep end. How a team can take on an individual’s personality, and insulate themselves from the pain of failure by simply blaming others, and removing their own responsibility from a situation. Heck, there’s even some evidence that San Diego has bought into Bradley’s lifelong paranoia about racism, and that the whole world is against him — though the articles cited seem to be conflicted about whether Bobby Meacham felt Mike Winters was being racist or not. (I, for one, am having a hard time trying to find the racism in calling someone a “f**king piece of sh*t”. But what do I know … people don’t say things like that to me. Further, Meacham might need a hearing aid — I heard plenty of foul language from Bradley on the replay on MLB TV. Oh, wait, maybe he meant Winters was speaking while standing in foul territory?)

Does the San Diego Padre organization realize how ridiculous it looks right now? That the entire team looks like a bunch of infants to the rest of the world? Anyone who watches the video of the game can see very clearly that Milton Bradley started the incident. He rapped a base hit up the middle and then immediately badgered Mike Winters. A video close-up of Bradley taking his lead easily caught a string of expletives that the worst lip-reader could figure out. Maybe at that point Winters was jawing at him, but that didn’t mean Bradley had to respond. Had Bradley been focusing on the game, rather than at what Winters was (or wasn’t) saying, he’d have taken second base easily on a pitch in the dirt to Josh Bard, but he was too busy carrying on his conversation.

It’s absolutely possible that Mike Winters lost his cool. Most of the time, I am in agreement with the idea that umpires have too-large egos lately, and that they bark too much with the players, and that they shouldn’t be noticed by the spectators. However, in this instance, you can’t give Winters all the blame (if any at all). It wasn’t Winters who struck out a few innings before, and it wasn’t Winters who threw the bat toward home plate umpire Brian Runge. And it wasn’t Winters who held the bat-throwing incident bottled up for two innings, and it wasn’t Winters who initiated the conversation between the two. No, in all those cases it was Bradley, who once again can’t comprehend why the rules that apply to everyone else in MLB must apply to him as well. Why can’t MLB simply ignore the rules when it comes to Bradley? Doesn’t big, bad, white MLB know that Milton has special needs, and should be treated differently? It’s just not fair!

Sadly, the Padres think they are doing a favor for their slugger by supporting him. Nothing could be further from the truth. By supporting Milton Bradley’s loss of control, they are vindicating him and his infantile view of the world that he thinks revolves around him. The Padres agree: the rules apply to everyone else, but not to Milton Bradley.

Back Series Preview: Mets vs. Nationals
Next Awake from a Long Slumber