Duke Snider was the best all-time player to wear #4 for the Mets. But his tenure in the orange and blue — a few months in 1963 — was too brief to consider honoring here.

Instead, we have four former Mets to honor with this magical number — Lenny Dykstra, Rusty Staub, Robin Ventura, and Ron Swoboda. Sure, I could have eliminated Swoboda — who other than a memorable catch in the 1969 World Series didn’t have a terribly significant career — but since the number is four, and we have four guys, what the hey? 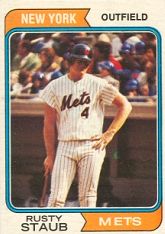 Though fans who began following the Mets in the 1980s knew him as the big, fat old guy who came in to pinch-hit for Randy Jones and Pat Zachry (and then headed over to Fifth Avenue to cook up “the best babyback ribs in New York City”), Rusty Staub’s “first” career with the New York Mets was much more memorable. Back when he wore number four, Rusty was the entire offense of the early 1970s Mets lineups. Looking at today’s standards, it’s hard to believe that his 15 HRs, 76 RBI, and .279 batting average in 1973 carried the Mets — but he did. In fact, he was easily the team’s most valuable player, as he was the most consistent batter and the one guy who the opposition pitched around (you must understand, the .239-hitting John Milner was often hitting either third or cleanup … these were tough times). After leading the team in RBI, batting average, and finishing second in HRs in 1975, he was inexplicably traded to the Tigers for an over-the-hill Mickey Lolich (why a team with Seaver, Koosman, Matlack, and zero hitting would trade their best hitter for another pitcher … bleh). Still, Rusty had endeared himself to the Shea faithful with his clutch hitting, and is honored here because without him, there’s no way the Mets enter the 1973 World Series. 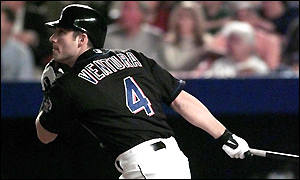 After ten years of terrorizing American League pitchers with his bat — and winning five Gold Gloves in the process — Robin Ventura became a free-agent and signed with the New York Mets prior to the 1999 season. He was the final ingredient for a team on the cusp of greatness.

Ventura was part of the “Greatest Infield Ever”, and (with all apologies to Edgardo Alfonzo) easily the most-skilled all-around third baseman in Mets history — a position that had been something of a jinxed sore spot for the organization since 1962. Similar to the circumstances surrounding the acquisition of John Olerud two years before, there were whispers that Ventura’s best days were behind him, and perhaps his personality would not be ideal for New York. Like Olerud, Ventura proved the naysayers wrong, big time.

All Ventura did in his first season as a Met was have the best season of his life, assembling career highs of a .301 batting average, 32 HRs, 120 RBI, and 38 doubles. His production was ample protection for cleanup hitter Mike Piazza, and instigated late-season “MVP!” chants from the Shea Stadium fans (he finished 6th in the voting). In August, he suffered a serious knee injury that he played through down the stretch — unbeknownst to the fans until the last week of the regular season, when it was revealed that he had torn cartilage. Nonetheless, he came up huge with heroics at the end, stroking a game-winning, pinch-hit RBI single against the Pirates to help propel the Mets into the Wild Card, and later hitting the historic “Grand Slam Single” to force a Game Six in the NLCS.

Before he turned into something resembling a WWF champion (roids? no, just a lot of work in the gym, cough cough), “Nails” was a scrappy little “smurf” who was an instant hit with the New York fans for his all-out, gritty style of play and flair for the dramatic. His 1986 rookie year was jam-packed with highlights, web gems, clutch hits, and tobacco juice — a storybook season if there ever was one. Diving catches, drag bunts, and ninth-inning homeruns were his forte, and we came to expect him to do something huge at just the right moment — and he rarely let us down. His walkoff two-run homer against Astros closer Dave Smith in Game Three of the ’86 NLCS goes down as one of the most memorable and important in Mets history. Why he was ever traded to NL East rivals the Philadelphia Phillies — with Roger McDowell and for Juan Samuel, no less — goes down as one of the worst trades in Mets history. 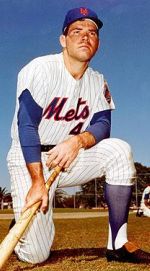 The Mets had their own “Rocky” long before Sylvester Stallone came along with his Balboa character. Ron Swoboda was another fan favorite — and like Dykstra was a hit for his all-out hustle, lack of fear, perpetually dirty uniform, and clutch hitting prowess. After hitting 19 homeruns as a 21-year-old in his rookie season of 1965, big things were expected of “Rocky”. Unfortunately, he never quite built on that rookie year, and finished a nine-year career with a .243 batting average.

Ironically, Swoboda was known as an awful fielder, prompting Casey Stengel to once say, “He will be great, super, even wonderful. Now if he can only learn to catch a fly ball.” I say ironic because between “The Catch” made by Willie Mays and “The Catch” made by Endy Chavez, there was “The Catch” made by Swoboda in the 1969 World Series — a valiant, amazing, diving stab of a line drive in the ninth inning of Game Four that saved at least one run and helped the Mets win 2-1 (in extra innings) and defined his place in baseball history. He also had six hits in the Series — more than any other player on either team. What Swoboda lacked in skill, he made up in heart, and will forever be cherished as a hero by Mets fans who had the pleasure of seeing him play.