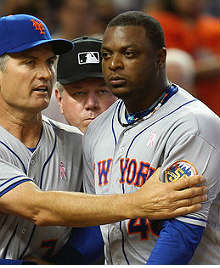 After tearing up the AL East with a 17-save campaign for the Toronto Blue Jays as a 31-year-old in 2011, Frank Francisco was the Mets’ biggest free-agent signing last winter – they hooked this big fish for two years, $12M to solidify the all-important ninth inning closer role. That’s right, folks: we have another year of watching Frank-Frank try to close the door on potential Mets victories.

At the time, the signing was lauded by some as one of those “smart” moves that could be pulled off only a highly intelligent, stat-savvy front office. On paper, it made sense; after all, Francisco pitched to a 3.55 ERA, 1.32 WHIP, 9.4 K/9, 1.1 WAR, and very respectable 3.36 xFIP. (There are probably a few other numbers that I’ve missed, but please excuse me as numbers are not my forte.) Not to mention, he accomplished all of this in the AL BEAST, the most competitive and difficult division for a pitcher in all of baseball. These shiny stats overshadowed minor details such as Francisco’s advancing age, the fact he blew nearly 20% of his save chances, had steadily increasing walk and hit rates, and was unable to make pickoff throws to first base.

In truth, I’m being a bit harsh. If we stick to the end goal of the signing — to fill the ninth inning with someone who would save games — then the acquisition was a success. Never mind Francisco’s unsightly 5.54 ERA, 1.606 WHIP, and 4.1 xFIP — he saved 23 ballgames out of 26 opportunities. In the end, that’s all that matters, right?

Oh, I can hear the Francisco supporters coming, armed with yet more stats: “Francisco’s K rate went up, as expected with a move to the NL, to 10 K/9. And he was very unlucky, as opposing batters had a career-high .339 BABIP against him. And that xFIP is outdated, you old fogey — what matters now is SIERA, and Frank-Frank’s was a stellar 3.62.”

Yeah, but he still can’t make a pickoff throw to first. (Not that it mattered, since no one in the NL could pick up and exploit that “minor” detail. Why waste money on scouting when you can put it toward buying everyone calculators?)

The supporters have another excuse on file: injuries. Francisco suffered an oblique injury that knocked out his July, and ended his season on the DL with elbow inflammation. It’s absolutely possible that Frank-Frank’s soaring ERA and WHIP had something to do with physical limitations. If only he could have been 100% healthy, and/or pitched in a league that didn’t outlaw PEDs, perhaps Francisco could have performed at a higher level.

The Mets are paying Francisco $6.5M next year to be the closer, and if he can propel a ball 60 feet, that will be his role on Opening Day. What happens beyond that is anyone’s guess.

Can he make a comeback from his putrid 2012, if he’s healthy? Maybe, though my first question is, what exactly would he be “coming back” to? Other than one decent year as a middle / late reliever in 2008 and another so-so season as a closer in 2009, Francisco has never been considered reliable or shown any kind of sustained consistency. He’s had trouble controlling his fastball, his weight, and his emotions throughout his professional career, and there isn’t any tangible evidence to expect he’ll suddenly change at the age of 34. Speaking of, his age — and more to the point, the wear and tear on his body — is a valid concern. Francisco had Tommy John surgery in 2005, and his mechanics didn’t change when he returned; so, his 34-year-old elbow has experienced seven years of the same habits that caused his 25-year-old elbow to fray (sure, some argue that the elbow is “new” after TJ surgery, but tell that to Jason Isringhausen).

My hope is that Francisco comes out healthy and guns a-blazin’ next April, racking up saves and becoming a lucrative trading chip come July. However my expectation is much lower.