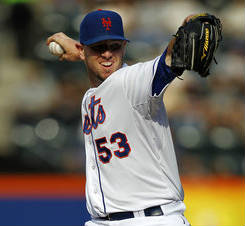 Once July came around, there wasn’t much for baseball fans in Queens to root for. Outsiders would likely chuckle at the idea that Mets fans found it thrilling when a journeyman minor leaguer such as Jeremy Hefner made a start. Yet, if you lived it, you know that things regressed that badly.

Nothing against Jeremy Hefner; personally, I like his work ethic and admire his perserverance. Mostly, I love that he’s made it this far with what he’s been given, which is an ordinary skill set. If one could combine the intelligence and tenacity of Hefner with the physical ability of, say, Oliver Perez; well, you’d have another Roy Halladay.

I don’t want to get too deep into his stats because they’re not impressive, so let’s topline it (that’s what they say in marketing meetings – “topline it”). Hefner appeared in 26 games, starting half of them, tossing 93 innings. On the bright side, he rarely walked hitters and gave up few homeruns. On the not-so-bright side, he gave up a ton of hits — too many for extra bases (more than a third of the hits he allowed were of the extra-base variety).
Hefner’s strength — and weakness — is throwing strikes. He throws tons of them. Unfortunately, too many of them wander over the middle of the plate, where batters feast. As a long man out of the ‘pen and spot starter eating innings, Hefner was a godsend to the Mets, who saw pitchers dropping like flies through the season. Most of the time, he was just that — an innings-eater. Occasionally, though, against bad clubs or a lineup having an off-day, Hefner pitched well enough to make one think, “hey, he might be good enough to be an MLB starter.” Such was the life of a Mets fan in 2012.

With an 89-MPH fastball, nondescript slider, not-slow-enough changeup, and a too-slow curve, it’s hard to imagine Hefner improving much beyond his 2012 output. He’ll turn 26 in March, which isn’t young, but does give him a little time to develop something. It’s unlikely that he’ll gain velocity — in fact, he might lose some going forward — so his best shot is develop a better change-up and fine-tune his command so that his pitches kiss the corners of the plate, rather than split it. Hefner is the exact type of pitcher who would have benefitted from PEDs back in the day, yet not be suspected of using — it might have been just enough to transform him from AAA filler to a MLB bullpen as a reliable middle reliever. But in this age of PEDs testing, it’s going to take acute skill development to make that step.
Hefner has a chance to make the Opening Day roster filling the same role as last season: long man / spot starter. If we don’t see him in April, we’ll likely see him at some point during the year.

Back Deconstructing the Restructured Giants
Next What If Pedro Martinez Didn’t Sign with the Mets?