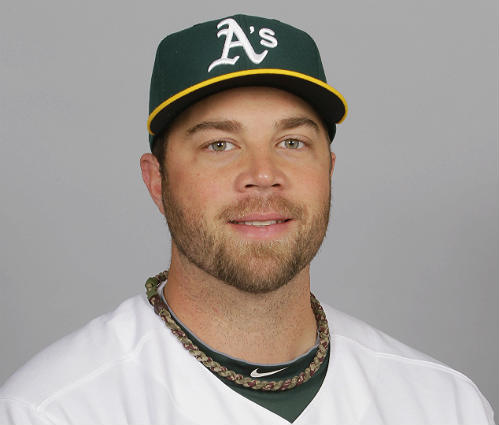 It’s actually a fascinating, somewhat sad story of how Landon Powell, a few months shy of his 31st birthday, came to receive a minor-league contract and spring training invite from one of the worst and most cash-strapped teams in MLB. There was a time that Powell was much more than a journeyman brought in mainly because spring training is a time that a team needs as many catchers as possible to receive pitches from dozens of pitchers.

Remember when Bryce Harper skipped his junior and senior years in high school, opting instead to earn a G.E.D. at age 17 and make himself eligible for the MLB draft? That wasn’t unprecedented – in 2000, Landon Powell was (I believe) the first high-schooler to pass the G.E.D. with the intention of leaving school before graduation and becoming eligible for the June draft. Just one glitch: he wasn’t drafted. All 30 teams passed on him, presumably because they “didn’t know he was eligible.” More likely, teams (perhaps by Bud Selig’s commandment) were hesitant to set a precedent of drafting non-graduated high school players; another story suggests that his “adviser” at the time — Scott Boras — “hid” Powell’s eligibility in order to shop him to the highest bidder. Powell wound up petitioning Selig for free agency status, which was granted, but ultimately, Powell chose to return for his senior year of high school.

Young Landon wasn’t quite the sensation that Bryce Harper was as an amateur, but he was definitely one of the very best prep players in the USA at the time. At a showcase sponsored by Baseball America and Perfect Game, Powell was listed as the fourth-best prospect among high school seniors. Number one was Casey Kotchman, and some of the others below Powell on the list included eventual MLBers Chris Carter (#5), J.J. Hardy (#6), Kyle Davies (#7), and David Wright (#15). Underclassmen listed included Jeremy Bonderman, B.J. Upton, Mike Pelfrey, Scott Kazmir, Ryan Sweeney, Delmon Young, and Lastings Milledge. How about that?

Interestingly, Powell was not drafted after his senior year of high school, and instead starred at University of South Carolina, batting well over .300 for his career and playing in the College World Series. Based on his impressive offensive and defensive skills, he was expected to be drafted fairly high after his junior year, but slipped to the 25th round (Cubs) — perhaps due to the fact he didn’t have a “good body,” as the old-time scouts like to say. He hired a personal trainer to build his Pillsbury Doughboy physique into something more athletic, and had a strong senior year. The Athletics made him their #1 pick (24th overall) in the 2004 draft; he was chosen just after Phil Hughes and before players such as Huston Street (who was also chosen by the A’s), Gio Gonzalez, J.P. Howell, Yovani Gallardo, Hunter Pence, Kurt Suzuki, Seth Smith, and Dustin Pedroia.

Powell’s pro career didn’t start out with a bang, to say the least. In his 2004 debut, he hit only .237 in a small sample size of 38 games. The following January, he tore his ACL and subsequently lost the entire 2005 season — but found the extra weight he carried in his first three college years. In 2006, weighing in at nearly 300 pounds, he hit .264 with 16 HRs in A-ball, spent a cup of coffee in AA, and was ranked as the A’s #20 prospect that winter by Baseball America; here is a snippet from that report:

His high school and college track record are solid, but the same question that always has dogged him — what will his body look like as a pro? — continues to cloud his future. Powell has power from both sides of the plate, a cannon arm (a 70 on the 20-80 scouting scale) and hands as soft as butter. He’s flexible, receives well and led California League catchers both with a .994 fielding percentage and by throwing out 52 percent of opposing basestealers. Playing every day in high Class A seemed to help Powell stay in shape, but he didn’t handle the gap between the regular season (which he finished in Double-A) and the Arizona Fall League well. His weight ballooned again — one scout estimated Powell was as much as 40 pounds over his playing weight — and his well-below-average speed was exacerbated by a complete lack of agility. Several scouts said Powell struggled to get out of his crouch to field bunts. If he stays in shape, Powell could be an all-star.

Over that winter he worked out again, shed around 30 pounds, and was “in the best shape of his life” to start the 2007 season in AA. In 260 games and 219 at-bats for Midland, he hit 11 HR with a .893 OPS, then belted three homers in four AAA games — before tearing his ACL for the second time and missing the rest of the season. Still, Baseball America ranked him as Oakland’s #7 prospect that winter:

Powell’s knee is a huge concern relating to his ability to remain a catcher. … His weight and conditioning fluctuate wildly, and the A’s kept on him to work out a dietary plan during this latest rehab. … Few scouts believe Powell can reach his full potential because of his injury history and his weight. If he can’t catch, his value will take a huge hit. That said, he was one of the top catchers in the minors prior to his latest surgery.

Powell was promoted to AAA Sacramento in 2008 and hit 15 HR with a .230 AVG and .360 OBP. By then, however, Suzuki passed him on the depth chart and was the A’s starting catcher.

2009 didn’t start out well for Powell — in fact, it was life-threatening. While working out in January, Powell went into convulsions and had to be rushed to the hospital. He was jaundiced, with disturbing liver readings, and the fear was that he had cancer. Eventually, he was diagnosed with autoimmune hepatitis, an incurable disease that attacks the liver cells. The original treatment, prednisone, caused awful side effects, so he was moved to a program of taking Imuran, an immune suppressant that makes him susceptible to illnesses and skin rashes, and budesonide, an MLB-approved corticosteroid that reduces the inflammation in his liver. He has monthly blood tests to monitor the disease, and had been told that, at some point in his life, he’ll require a liver transplant.

Eventually, though, Powell made it through that spring training and made the big-league club, whacking a two-run double off of Felix Hernandez in his MLB debut. He wound up playing in 46 games that year, hitting only .229 but blasting 7 HR in 140 ABs and posting a .725 OPS. Powell spent 2010 again as Suzuki’s backup, hitting just .214 with 2 HR in 41 games. He did have one highlight, though: he caught Dallas Braden‘s perfect game.

A similar story played out in 2011; with Suzuki as a workhorse, Powell caught 36 games, hitting .171 with one homer in 111 at-bats. The A’s traded Gio Gonzalez that winter for a package of prospects that included catcher Derek Norris, and Powell was released during spring training of 2012. He hooked on with the Astros, spending the entire season with AAA Oklahoma City (PCL), where he hit .251 with 8 HR in 79 games.

On March 19th, Landon Powell turns 31 — an age far away from “prospect” status. Who know what might happen in 2013, though? With a strong spring, and a little luck, Powell could wind up playing for the Mets — maybe even flashing the brilliance that once made him one of the game’s most promising young backstops. Regardless, one has to wonder what might have been. Further, Powell’s story offers perspective and balances enthusiasm when we look at today’s young phenoms and wonder what will be.

(By the way, you can learn about Landon Powell’s charitable activities and contributions at Donors on the Diamond.)