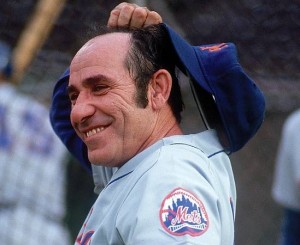 This is the phase of Spring Training where we start to wring our hands and worry about injuries and try to predict who’s going to start on Opening Day.  Since I have enough to worry about in real life, I’m adopting a new philosophy – I’m not going to worry about baseball – at least not until the actual games are played.

Baseball is supposed to be a welcome distraction from the real world anyway – a chance to lose yourself in a sporting event for 3 hours.  So I’m just going to get into a “Lilting Flower” pose (or whatever that yoga pose is – I have hamstrings of concrete which prevent me from doing yoga anyway) and not worry about whether David Wright or Justin Turner or Richie Hebner will start at third base on Opening Day.

And I’m not going to worry about the outfield, which could be really bad, just like the 2000 outfield was on paper.  Besides, if Lucas Duda can keep hitting the ball the way he has lately in ST, maybe he can make us forget that he has the range of and Easter Island statue in left.

More importantly, what do the Mets bat weights look like this year?

Oh, and the bullpen is going to be better this year.  It’s in the Post, so it must be true.

So, Ohm and Kumbaya and let’s play ball already.

Back Who Embodies the Mets?
Next Lastings Impression – the Latest Mets Problem Child