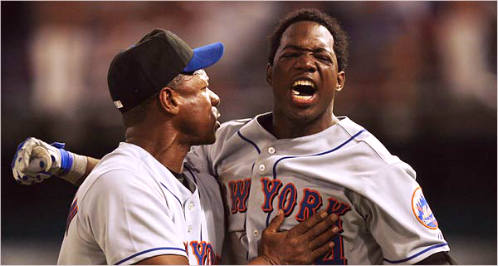 There’s an article by Jorge Castillo in NJ.com about Jordany Valdespin and his “complicated” clubhouse presence.

After reading it, I can’t help but recall Mets from the past who followed the beat of their own drum and — because of their passion / personality / immaturity / fill-in-the-quirk — didn’t quite fit in with their teammates.

Players such as Lastings Milledge, Carl Everett, Lenny Randle, Dave Kingman, and Jeff Kent — for example — have worn Mets uniforms for brief periods that felt longer due to varying issues of controversy tied directly to their “unique” personalities. Everyone is different, and it’s entirely possible for those “different” players to peacefully assimilate with their teammates and perform well on the field — IF the team and the environment allow it. Problems can arise, however, in big-media-market environments like New York City, and on losing teams; just ask Bobby Valentine or Josh Beckett. Though sometimes the individuality can be seen on the field, what it often comes down to is the player’s interaction with the media. There have been many quirky personalities throughout MLB history, but we only find out about the ones whose stories come out in the press (or from the result of an arrest).

Reading this quote from NJ.com, an eerie feeling of deja vu came over me, recalling the “know your place, rook!” sign placed on Lasting Milledge’s locker:

“Jordany’s a very good player and the sky’s the limit, but there’s definitely a flair and sometimes it’s too much,” said a Mets player, who was granted anonymity to speak freely about a teammate. “He needs to mature a little and hopefully he learns.”

Then there was this line, which was redolent of similar quotes about Carl Everett:

“There’s no denying his talent, but he’s someone who’s more in tune with himself than with the team at times,” another teammate said.

Now, I’m not saying Jordany Valdespin will start recording offensive rap songs or deny that dinosaurs ever existed. However, to see a story like this come out so early in a player’s career, before he’s really done anything, and knowing he’s swimming in the often-turbulent fish bowl of New York, playing for a team that is likely going to be less interesting on the field as the season progresses … well, it’s not what I’d say is an ideal recipe for the young man. This story came out mainly because there isn’t much else to talk about in Port St. Lucie right now — what happens in late July, if/when the Mets are out of contention, and again the beat writers are searching for stories and headlines? Valdespin might be the lightning rod, and — whether deserved or not — the result could be a public perception that becomes damaging to both the player and the organization.

What’s your thought? Do you think Valdespin’s off-field story could become bigger than his on-field performance? How good does he — or the Mets — have to perform to retract the growing perception that Valdespin is “too different” from his teammates? Can this story end well? Sound off in the comments.