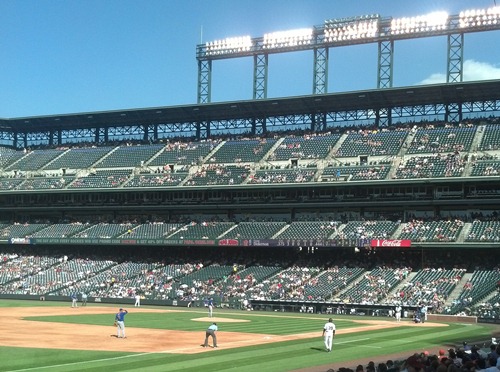 In the Mets’ case, it was a quick stopover to play a makeup game with the Rockies at Coors Field. It was a game that was bumped down the calendar from a four-game set in April – a series that saw the teams squeeze in three of the four games in between piles of snow and freezing temperatures. Yesterday’s makeup game was a different story.

Instead of temperatures in the 20s and 30s, the Rockies’ scoreboard reported the mercury at 95 degrees. If you were in the sun, it felt hotter, but like the cliche about Arizona, it’s a dry heat.

Fortunately my seats along the left-field line were blanketed in shade for the entire game, making the heat a non-factor.

The traffic on I-25 in Denver was a factor however, as it usually is, even at 3:30 in the afternoon. Arriving late, my fiancee and I took our seats in the top of the third inning, and the Mets were already behind, 2-0. In fact, the runs scored somewhere between the parking lot on Blake and Broadway and the right field entrance to Coors Field.

On the radio, we heard Michael Cuddyer collect a base hit to extend his hitting streak to a Rockies-record 24 games. Once we were in the ballpark, the scoreboard showed the two tallies for Colorado, and a big E for the Mets. Neither number was surprising for the 2013 Mets. As a Mets fan, I immediately lowered my expectations for a comeback and decided to enjoy the late afternoon at the ballpark.

It was a sparse crowd, but not bad for a makeup game (34,387 paid attendance, according to the official records – but it looked like less, as always). Coors is in a great location – it’s within walking or bus-ride  distance from most anywhere in downtown Denver. So on a weekday 4:10 start like this, one could get out of work an hour or two early and catch the game. It’s also surrounded by bars and restaurants that are packed before and after most every Rockies game. I would love to see the area around Citi Field develop a similar vibe. Make it a neighborhood that invites you to spend the day, not just get in and get out.

During the middle innings, two guys in front of us, a Mets fan transplanted from New Jersey and a Rockies fan, provided entertainment in between pitches as they heckled the players and one another.

Meanwhile, Jeremy Hefner found a groove, keeping Colorado’s hitters off balance. Any time there was a baserunner, he found a way to get a ground ball double play. Any time a ball was hit hard, it seemingly found its way into a Mets glove.

The Mets scratched out a run in the top of the fifth to cut the lead to 2-1. With first and second and no outs, Juan Lagares dropped down a bunt – it looked to me like he was bunting for a hit – and made it to first without a throw. That loaded the bases with none out and Anthony Recker, the number 8 hitter coming to the plate. With the bottom of the order coming up, I would have preferred Lagares try to swing the bat, despite his .229 batting average.

Recker grounded to third, and Nolan Arenado made a nice, spinning throw to home plate to get the force, and Wilin Rosario nearly turned it into a double play against the glacial Recker. That left the bases loaded for Hefner, who hit a similar grounder – a little slower and little more toward the hole – to Jonathan Herrera at shortstop. Troy Tulowitzki‘s understudy got the out at second, but Hefner beat the return throw to first.

One run. I harkened back to a Mets/Rockies game I attended at Coors back in 2001, when a similar slow-drip rally resulted in a Mets run (I think Desi Relaford was involved somehow). A Rockies fan shouted “you call that a rally?” Yes, the 2001 team had trouble scoring runs as well.

That seemed to be the best chance the Mets would have against Tyler Chatwood. The Rockies’ starting pitcher came into the game red-hot, and carried a no-hitter into the fifth against Mets. But Hefner kept the Rockies from scoring for two more innings, and LaTroy Hawkins held them down in the seventh.

In the eighth, with the shadows invading the critical patch of land between the mound and home plate, Daniel Murphy hit a grounder up the middle that inched past the Rockies middle infielders. Herrera and second baseman Josh Rutledge failed to communicate with each other, and ended up in a minor collision – let’s call it a fender bender. They made a similar mistake later in the inning. It’s remarkable that major league players can make simple mistakes like failing to coordinate who is supposed to field a ground ball.

Then the hitter was Marlon Byrd. In this David Wrightless lineup, Byrd was the most likely candidate to go deep. But after a Murphy stolen base, all he had to do was single. Rockies pitcher Matt Belisle got ahead of him 1-2, then fell to 2-2. Then he gave Byrd a pitch to hit.

From our angle, it was clear by the speed and trajectory of the ball that it had a chance to go out, despite the fact it was hit to one of the deepest parts of the park. But when Carlos Gonzalez pulled up at the warning track, it was obvious that the Mets had taken the lead.

As I clapped, two Rockies fans flipped me the bird (ironic, when you think about it).

For the next 6 outs, I uneasily sat – albeit with continued low expectations – as the bullpen tried to hold the lead. Scott Rice made his 8,000th appearance of the year (give or take), and got in trouble. The first single he allowed was erased when he picked off DJ LeMahieu, but one out later, Rutledge singled.

So, it was down to a matchup between Scott Rice, and one of the game’s best hitters, Carlos Gonzalez. When CarGo went down swinging on a high fastball, three Mets fans, who were scattered in the seats in front of us, stood in unison and cheered.

Sure, it’s just a June 28th game, but everything is magnified when you’re at the ballpark – especially when you’re a transplanted fan who has scant opportunities to watch your favorite team in person.

In the ninth, Cuddyer hit a hard shot past first baseman Josh Satin (The man responsible for the earlier error on the scoreboard). Instead of being happy with a leadoff single, Cuddyer thought he could catch Byrd napping – and he almost did. Byrd pulled up for a split second when he fielded the ball, but recovered quickly enough to fire a one-hopper to second to nail Cuddyer.

Bobby Parnell retired the next two batters to give the Mets a win.

Hefner was solid, as he has been for most of the year. He now has a respectable 3.72 ERA and 1.29 WHIP. The bullpen was reliable, and the defense was mostly rock solid.

But the star was Byrd, who’s turning out to be one of those undervalued players that pop up and surprise us every now and then. The Mets have gotten pretty good production out of him (similar to the production the Braves have gotten out of Justin Upton this year, only without the long-term commitment, and a lower salary).

In this game, he carried a tired lineup of backup players to a win with his bat and his arm – with an assist to Hefner and the bullpen.

It’s only one win, it’s late-June, and the Mets are still 11 games under .500. But it was awfully nice of them to play decent baseball in one of the few (if only) games I’ll be able to attend this year.

Back Mets Game 75: Win Over Rockies
Next Mets Game 76: Loss To Nationals