Everyone has been so concerned with the Atlanta Braves, yet the Phillies are now right in the Mets’ rearview mirror at only three games back. Tonight’s game was an example of what happens when a good team (the Mets) runs into a red-hot team (the Phillies): everything seems to go right for the hot team, despite the best efforts of the good team.

While it’s true the surging Phils are establishing themselves as a team to be reckoned with, this game is nothing to be concerned about. SO many things fell into place for the Phillies: the near-catch by Nady that turned into a triple; the dropped catch by Burrell that turned into a forceout at 2B; the awful strike-three call on Kaz in the eighth; the triple by Dellucci in the ninth, which was fair by about three-tenths of an inch; and of course the misplay by Heilman on the swinging bunt by Abreu that ended the game. If any of those plays go the Mets way, the Mets probably win.

Despite all the balls bouncing the Phillies’ way, the Mets did not bury themselves, but instead phought back, phorcing a blown save by Philadelphia closer Phlash Gordon. What the Mets are showing this year is that, no matter the circumstances, they will be competing, and will not go down easy. Theirs is the tenacity of a champion.

With the emotional outcome of this game, don’t be surprised if the momentum carries over into game two, and don’t panic if the Mets drop another one. It’s early in the season, and over the long haul, it looks like the Mets will be the dominant team in the East.

However, I would like to slap poker-faced Pat Gillick, who before the season was telling anyone who would listen that he absolutely did not expect the Phillies to compete for first place this year. Sorry, pandering Pat, we see right through the ruse: you have an up-and-coming team THIS year, and no amount of self-pity will excuse you if the Phillies fall short.

This promises to be a fun and exciting summer !

Mets Rely on the “Crisco Corps” 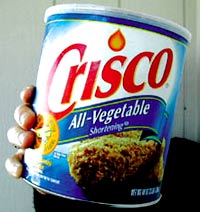 Omar Minaya’s plan in 2006 is to “shorten the game”, and through the first 31 games of the year, the plan has been followed exactly. The starting pitcher goes five or six innings, followed by the LOOGY-ROOGY-LOOGY combo of Oliver-Bradford-Feliciano, then Sanchez and Heilman handle the 7th and 8th, then Billy comes in to save the day.

Occasionally, Tommy Glavine or Pedro Martinez will mess with the plan by pitching seven or eight full innings. To combat this deviation, Mr. Willie simply compresses the plan, by having Bradford face a righty in the 8th, then either Feliciano, Oliver, or Heilman face a lefty, then bringing in Sanchez to get the third out before Wagner finishes. Luckily, this only happens once or twice a week, as the remainder of the starting rotation — Trachsel, Zambrano, Bannister, Lima — have done a great job being moderately effective for five innings, and consistently faltering in the sixth.

The Mets are currently in first place, 21-10, so the plan is quite obviously working. However, there is this little part of me — call it extreme pessimism, fear of the Mets curse, or what have you — that the Plan to Shorten the Game has a few flaws.

First of all, it’s hard to find a World Series Champion Team that relied almost exclusively on this type of pitching strategy. There was the 1975 and 1976 Cincinnati Reds, better known as “The Big Red Machine”. Though they started an All-Star or future Hall of Famer at nearly every position on the field, their starting rotation was mediocre at best. Manager Sparky Anderson employed a radical strategy at the time, which was to pull his starters at the first sign of struggle, and hand the game over to his very deep, fairly talented bullpen. He pulled his starters so quickly, he earned the moniker “Captain Hook”. For example, he’d take a guy out after only five or six innings, even though he had a lead and pitched well. Only two of his starters managed to garner 200 innings by the end of the year. In the mid 1970s, this strategy seemed pure nonsense, but Sparky’s lack of talent with the starting five left him few other options.

If you told someone in 1975 that Sparky’s seemingly nonsensical strategy would be the norm 30 years later, they’d think you were crazy. Few would believe that, with all the improvements in nutrition, conditioning, muscle building / training, and the emerging understanding of proper mechanics, pitchers would pitch LESS than they were at the time. Logic would suggest that the multitude of advances would allow a pitcher to throw more pitches in a game, and be more effective. Though it was true that the bullpen was becoming an increasingly more imporant facet of the game, Sparky’s quick hook was seen more as desperation than strategy.

Yet here we are today, and it is a rarity to see a pitcher throw 200 innings in a season. And it is completely normal for a relief pitcher to appear in 70+ games, as Rawly Eastwick did in 1976. That said, Omar Minaya has taken to the idea of pushing the envelope even more, but how far can he push and still be successful?

Looking at the last 100 years of WS Champs, it’s hard to find a team as dependent on the bullpen as the Red were in those years, so it’s nearly impossible to evaluate whether this is a good plan. The ’84 Tigers were similar — and also managed by Anderson — but they still had some true workhorses in Jack Morris, Dan Petry, and Milt Wilcox. As quick as Sparky was to draw the hook, his ’76 Reds starters completed 33 games, while Morris and Petry combined for 16 completes in ’84. In comparison, it would be surprising to see the entire Mets staff complete 16 games over a three-year period.

The 2002 California Angels are probably the best example, and seem to match Omar’s blueprint. But is it smart to follow a plan that produced a World Champion only three times? Is there perhaps a reason why more teams have not followed this strategy?

There is a very conclusive reason why Championship teams are not built by the bullpen first, and it was exemplified by the Washington Nationals last year: the bullpen will burn out, and when that happens, you’re left with a huge hole because the starters are conditioned to go no further than the fifth. The Mets might be able to avoid a breakdown if Sanchez and Heilman were used separately, and if a Mets starter could complete a game say, once a week or once every two weeks. However, so far Sanchez and Heilman have very often been used in the same game, and it’s doubtful we’ll see more than three complete games the entire season. At the rate the Mets are going, there will be five pitchers logging 80 games by the end of the year: Wagner, Heilman, Sanchez, Bradford, and Julio. In contrast, that ’02 Angels staff had only one pitcher — Ben Weber — pitch in more than 60 games.

The Mets’ brass might argue that the relievers will be appearing less as the season wears on, as the starters will theoretically stretch out more innings. However, I do not see any sign of this happening. For one, Pedro will be protected, and rarely given the opportunity to go past the 7th. Though Glavine could potentially be an innings-eater, there isn’t any other starter who can plausibly log 200 innings. Steve Trachsel barely did it in 2004, but that was before his back injury and when he was on the right side of 35. Brian Bannister is averaging just over 5 innings per start, and seemed to be regressing before his injury. With Victor Zambrano out for the season, the Mets find themselves without a third starter, and there’s no way the current options — Jose Lima, John Maine, Jeremi Gonzalez, Darren Oliver ??? — can be counted on to provide the type of quality starts that will lessen the bullpen’s load.

It seems dangerous to assume that the Mets’ bullpen — regardless of how “strong” it is — will be able to shoulder the load when the starting pitcher won’t get past the 5th inning in at least 60% of the games. Add to that the fact that the two “workhorses” of the staff, Glavine and Martinez, don’t figure to complete more than five games between them, at best. More likely, we’ll see a Nats-like breakdown of the bullpen sometime after the All-Star break. Even if the pen somehow manages to remain effective through September, will they have enough left in the tank to get through a playoff series? Here it is early May and Mr. Willie handles sixth-inning lefty-lefty matchups like it’s the seventh game of the World Series; what will he do when it IS the World Series? Pull a Billy Martin-Sparkly Lyle move and bring in Wagner to close out the game in the fourth inning?

So if indeed the Mets’ bullpen is destined to burn out, what can be done to remedy the situation? First, don’t rely on the strategy of “shortening the game” for every single game. Let Glavine finish what he starts on occasion, or at least let him pitch eight innings when he’s going well. Do the same with Pedro, specifically in games where he’s performing with a low pitch count. Next, move Aaron Heilman to the rotation, as soon as possible, and condition him to go 7+ innings per start. Why Heilman? Because the Mets current options to fill VZam’s spot have no history of showing the skill nor the wherewithal to suddenly become a 7+ workhorse — and all are over 30, not at an age where improvement is likely. Heilman, on the other hand, clearly has the skills to succeed at this level, and combined with his youth, has the potential for 7+ inning strength. Sure, it’s no guarantee that Heilman won’t become another 5-inning starter, but isn’t it worth finding out? He completed most of the games he started in college, and averaged close to six innings per game in his minor league career (and keep in mind that he was a #1 draft pick, thus limited to the Mets’ organization’s asinine 100-pitch limit; if not for the century mark, he well might have gone deeper into games). In short, he is an unknown quantity, with good upside, and the potential to be a legitimate #3 starter. Why pass on that and instead start guys like Lima, Gonzalez, and Oliver, who are way past their peak years, and never showed the ability to eat innings, even in their prime? (OK, Lima was a legit ace at one point, but that was nearly ten years ago.)

Until the Mets rethink their game-shortening strategy, the “Crisco Corps” is fated to slip and slide by summer. I really hope I’m wrong.