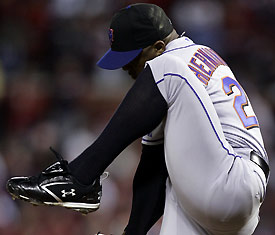 It wasn’t particularly spectacular, or filled with dramatic moments, but it was a win. The victory was due in large part to Orlando Hernandez, who pitched seven strong innings and allowed only one run on five hits. That one run came in the seventh inning — a homerun by Scott Rolen — when El Duque was clearly fatigued. He barely squeaked through the rest of the inning, getting away with several high, flat fastballs around the middle of the plate. All in all, a great performance by Hernandez, and particularly encouraging in that he went so deep in the game while remaining efficient (just over 100 pitches).

Instead of highlights and homeruns, the Mets won again behind strong fundamentals and execution — particularly on defense. El Duque threw strikes, the Mets turned three double plays, no errors were made, and the offense made the most of opportunities.

The first run of the game was manufactured by Jose Reyes. He led off the game with a walk, took second on a throwing error by pitcher Kip Wells, moved to third on a good bunt by Paul LoDuca, and scored on a sac fly by Carlos Beltran.

In the fifth inning, it was Reyes instigating again, hitting a two-out base single. He attempted to steal on the second pitch to Paul LoDuca, and despite a bad jump, was called safe as Yadier Molina double-clutched before releasing the ball. What was perhaps overlooked was LoDuca, who squared around to bunt on the pitch, and as the pitch came in, pulled the barrel of the bat back — in the line of Molina’s vision. Of course, LoDuca was never going to bunt, he was merely making life more difficult for Molina. The combination of LoDuca’s bat in his eyes, compounded by the urgency of Reyes running, caused Molina to flub the exchange from his glove to throwing hand. On the very next pitch, LoDuca blooped a fly ball to right field that was misplayed by Skip Schumaker, allowing Reyes to score. These two first runs were reminiscent of the way Bobby Cox’s Braves won for years — scoring ugly. Scary for opponents to know that the Mets will not only belt you to death, but will score via execution of fundamentals and the “little things” that win ballgames.

Long Branch, NJ native Scott Schoeneweis made his debut and was so-so, getting two quick outs but then unable to finish off the inning. Aaron Heilman was again summoned to drop the hammer, and he induced slugger Albert Pujols (the potential tying run) to fly out harmlessly to centerfield, stranding runners on the corners. Billy Wagner finished the game without incident. Wagner and Heilman are on course to shatter Mike Marshall’s record of 106 pitching appearances.

In the sixth inning, with men on first and second and no out, it looked like Moises Alou was primed to bust the game open and chase starter Kip Wells. The first pitch was low and outside, but the home plate umpire called it strike one. No big deal. But then the next pitch, in a similar location, Alou started at, but then checked his swing. Except that first base umpire disagreed and said he went around. The next pitch, Alou got great wood on the ball, and broke into a homerun trot. However, the strong crosswinds blew the ball back onto the field and turned into a harmless fly ball out. It’s at-bats such as this that keep a batter humble.

Loyal readers know I’m a big supporter of Shawn Green, but in this contest he was a major letdown. A critical point in the game came in the top of the sixth. The Mets had men on second and third with one out and Shawn Green at the plate. Cardinals pitcher Kip Wells was on the ropes, and could have elected to pitch around Green to load the bases and then hope for a double play from Jose Valentin. Instead, Wells went after Green, and worked the count to 3-2 before striking him out looking. What bothered me about this at-bat was Green’s lack of aggression. Generally, I like to see batters take pitches and get into deep counts. However, this was a situation where Green could have broken the game wide open with a base hit. Wells threw four pitches that were borderline strikes; two were called as such, and Green waved at a change-up out of the zone. If Green wants to keep Lastings Milledge on the bench, he needs to be more aggressive in those type of situations — specifically because of his spot in the order. Because Green struck out, the Cards were able to intentionally walk Valentin to face the pitcher with two outs. Luckily, Orlando Hernandez hit a rare double to erase Green’s strikeout — I wonder if El Duque was so disgusted with Green’s lack of aggressiveness that it motivated him to mash. In any case, Shawn Green needs to take advantage of those opportunities to shine — both for the Mets to win and for Green to remain in the lineup.

Fans of Baseball This Morning on XM Radio may know there’s a new segment called “Huh…” Well I’m stealing the concept to point out something that made me go “huh…” : Aaron Heilman throws a splitfinger fastball. At first I thought Billy Wagner didn’t know what he was saying, when he mentioned to reporters in a postgame interview that Heilman could throw his fastball, changeup, split, or slider whenever he wanted. Then later, when the microphones were in front of Heilman, Aaron mentioned that he mixed in a few splits in the all-important Albert Pujols at-bat. Huh. So there you have it — Aaron Heilman is NOT a “two-pitch pitcher”, as many claim. In fact, he throws FOUR pitches, and all for strikes.

Glad to be a Mets Fan

It’s days like this I’m especially glad to be a Mets fan. After taking Opening Day from the reigning World Champion Cardinals, Mets fans could bask for two days in the afterglow, and read countless summaries of the game highlights. It was not redundant reading 17 different columnists refer to his 191st career victory as “vintage Glavine”; my eyes did not tire watching the double play that ended the eighth inning three dozen times on ESPN; my ears heard Paul LoDuca’s voice as a song — perhaps by Sinatra — in the postgame interview. As a Mets fan, we can enjoy the victories to the fullest.

Our friends who follow the “other” New York team, however, don’t enjoy victory. Perhaps because they expect it. If the Yankees went 160-2 on the season, Yankee fans most likely would dwell on the two losses, shaking their head with disgust.

I say this because after the contest, I wasn’t sure whether the Yankees had won their season opener. The radio, the blogs, the newspapers — everyone it seemed — were focused on the much bigger events in Yankeeland. Specifically, The Divorce. Secondarily, the subject of A-Rod, particularly his error and inability to hit in the clutch. The postgame interview that kept playing was of Joe Torre deflecting the blame of The Popup toward Jorge Posada and away from Alex Rodriguez. Nothing about the win, or the way Carl Pavano pitched, or how their bullpen did a great job. The biggest news in the Bronx were two questions: “why is Jennifer divorcing Steve?” and “will A-Rod opt out of his contract?”

Fans are clamoring for A-Rod’s exit already, one game into the season. It’s amazing that a guy can get a base hit, steal second, score the go-ahead run, later hit a two-run homer to put the game away for good, and fans are still unhappy with the performance. The most critical fans point to the homerun and say, “typical A-Rod, hitting a tack-on homer to pad his stats. He never hits in the clutch.” One fan who called into a radio show had the audacity to criticize Rodriguez for coming into camp with 3% less body fat. “He should have been in better shape last year … he got himself in shape now so he could opt out of his contract and make more money.”

Makes you feel that much more grateful to be a Mets fan, and root unequivocally for everyone in the orange and blue.